Aledmys is married to his beautiful girlfriend Dayara and has a son born in 2016.

How Much Is Aledmys Diaz's Net Worth and Salary?

Aledmys Díaz Serrano has an estimated net worth of over $8 million in 2019. In addition to this, he has earned a decent amount of money from his professional baseball playing career which is around $12,000,000 and definitely he will have more in his future.

Aledmys Diaz reportedly signed a one-year contract with the Toronto Blue Jays which is worth of $2 million and is signed on March 24, 2018.

Is Aledmys Diaz Married? Who Is His Girlfriend or Wife?

Aledmys Diaz is a married man and is in a marital relationship with his girlfriend turned wife Dayara. The detailed information about his married life and also about his wife/spouse aren't yet disclosed in the media.

So far the couple seems to be living a happy married life with each other since they haven't reported any disputes going between them. Currently, they are living West Palm Beach, Florida the United States. Despite his busy schedule, he manages time for his family.

The Famous MLB star is 6 feet in height and weighs around 88 kg. Talking about his current age, he is 29 years old now.

Aledmys Díaz Serrano was born on August 1, 1990, in Santa Clara, Cuba to father Rigoberto Diaz but hasn't mentioned about his mother. He is Cuban by nationality and belongs to the Mixed ethnic group. Further, his star sign is Leo. 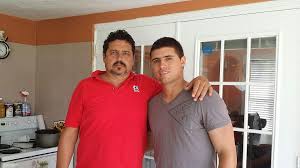 In his childhood, he was a friend to Jose Fernandez who later played in the MLB and both of them were inspired by Diaz's father and uncle to start baseball as their career. It can also be said that he has got very much supportive parents.

Aledmys played in the Cuban National Series before entering into Minor League career where he started his professional career in 2007. After that, he began his career in the minor leagues where he played until 2016.

Diaz made his MLB debut with the team St. Louis Cardinals in 2016 and he got the chance after the departure of Tommy Pham. He played over a season with the Cardinals and was further traded to the Toronto Blue Jays on 2018.

He didn't play much for the Jays team and soon after a year in 2018, November he was traded for Trent Thornton to Houston Astros and is playing alongside Jose Altuv.