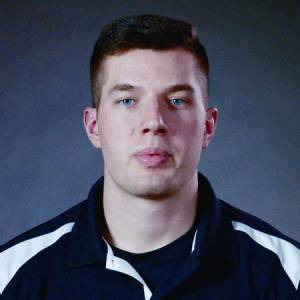 The rising star of Basketball, Alec Peters plays as a Power forward/small forward for the Phoenix Suns of the National Basketball Association (NBA). Previously, he also played college basketball at the Valparaiso University, where he was an All-American in 2017.

Peters was born on April 3, 1995, in Washington, Illinois. He holds an American nationality and is of white ethnicity, whereas his star sign is Aries. He has an older brother Austin and two sisters who are younger to her.

Peters was passionate about the game basketball, since his early age. He attended Washington Community High School, where he played basketball for several years. Upon high school graduation, Peters selected Valparaiso over Boston College, Missouri, and Tennessee.

Valparaiso provided the perfect platform to Peters to prepare for NBA draft. While playing for Valparaiso Crusaders men’s basketball team, he improved athletically and got bigger and stronger.

As a sophomore, Peters averaged 16.8 points and 6.7 rebounds per game. In the 2015 Horizon League Tournament, Peters was named tournament MVP after leading the Crusaders to NCAA tournament.

In his junior season, Peters performance was more improved and 18.4 points and 8.4 rebounds per game. Moreover, he also leads his team to the 2016 National Invitation Tournament Final, where he loses to George Washington.

Prior to 2016-17 seasons, Peters was honored as the preseason Horizon League Player of the Year. On March 10, 2017, he underwent a surgery on his right leg, which resulted missing four games of his college career.

Peters left the Crusaders with a slew of records, achievements, and honors.

Upon college graduation, the Phoenix Suns picked Peters in the 2017 NBA draft. Currently, he is an official player of Suns’ 2017 NBA Summer League squad. Until now, he did not play any game due to the right leg stress fracture.

Peter’s outstanding performance dragged the attention of countless people from around the world.

Peters has thousands of fans especially his female admirers dying to know about his affair, dating, history or marriage life. It seems, this handsome player is single now and not dating anyone at this moment. Until now, he there is no news in the media about her girlfriend.

Peters is very close to his family. He is caring to his sisters. He inspired upcoming generations with his career journey. He received a degree in sports management from Valparaiso University. He has a hobby of cooking. He loves Mexican food and Pasta

He has a maintained a great health and personality with regular gym and nutritious diet. He has a gigantic height of 6 feet 9 inch, which is around 2.09m. He has a balanced weight of 107 kg.

Peters just entered into the world of NBA. Prior, he successfully established himself as NCAA basketball player.

During his college years, Peters received around $100-120K a year.