A native of Buenos Aires, Argentina, Agustin Rossi is widely known as a professional goalkeeper who represents Boca Juniors. In his current team, Rossi wears jersey number 1. Rossi was interested in pursuing a career in this sport from an early age, and he has been representing his current team since 2017.

His contract with Boca Juniors was extended on January 10, 2019. Furthermore, Rossi began his career by joining Chacarita Juniors. Meanwhile, he has also represented the national football U20 team of Argentina. And now, he is listed in the senior squad, which is playing in the FIFA World Cup 2022.

Salary & Net Worth: How Rich Is Agustin Rossi?

Rossi makes most of his gains from being a professional goalkeeper, and he is currently a part of Boca Juniors. As per a report given by Salary Sport, Rossi takes £8,500 weekly and £442,000 per year. Likewise, his current market value is €5.00m.

As we know, he has been playing for Boca Juniors since 2017, and during that time, Rossi received €1.30m. No doubt, Rossi lives a quality life as he is doing pretty well in his football career. Looking at his graph on Transfermrkt, there is no doubt that his income will skyrocket in the future. 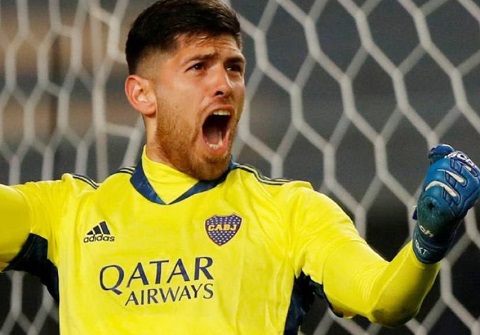 Furthermore, Rossi enjoys a decent net worth, and some online sources report that his net worth is around $500,000 to $1 million.

Is Rossi Dating a Girlfriend?

Moving into his love life, Rossi is a private guy who has not opened up in the media talking about his love life. So, it is speculated that Rossi is currently single and he does not have a girlfriend. As Rossi has kept his personal matters far from us, we are unable to talk much about it.

In the same way, Rossi does not have much activeness on social media, making it more challenging to know about his girlfriend or wife. However, the goalkeeper may give some updates about it in the future as his fans and followers keep asking questions related to his love life.

Take a Look at His Professional Career

As said earlier, Rossi was interested in playing football from an early age, and just at the tender age of 6, he joined Chacarita Juniors. So, Rossi spent his whole youth career with the team. Rossi's senior career also started with the same squad, and playing with them at the senior level, Rossi made 19 game appearances.

On December 25, 2014, Rossi moved to Estudiantes. Playing with Estudiantes, Rossi was a part of just three games. In 2016, he was loaned to Defensa y Justicia. So, with the respective squad, Rossi played in 10 games. Similarly, Rossi played with Antofagasta and Lanus on loans in some games.

More on His Age & Nationality

Rossi was born Agustin Daniel Rossi on August 21, 1995, in Buenos Aires, Argentina. So, Rossi holds Argentine nationality. When he was a child, Rossi practiced soccer and basketball.

Likewise, his parents have supported him since the beginning of his career. Coming into his height measurement, Rossi peaks at an amazing height of 6 feet 5 inches (1.95 m).