Agiye Hall is an American football wide receiver for the Texas Longhorns. The athlete studied and played High School football at Bloomingdale High School in Valrico, Florida. Hall is one of the rising American footballers who is a possible prospect for the NFL. During his first year of college, he played at Alabama University. For his sophomore season, Hall was transferred to the University of Texas at Austin (Texas Longhorns football team).

The body measurement of Agiye Hall (Height and weight)

Agiye Hall, the Longhorns jersey no. 84 is from the black family background. The receiver has a long shredded, and athletic body structure. He is 6 ft 3 inches tall and weighs 89 kg. Further description, Hall has long braided hair and black eyes.

Texas Longhorns wide receiver Aguye Hall was born and raised in Valrico, Florida. He attended his high school at Bloomingdale High school in his hometown. Later on, he is committed to studying at Alabama for further studies. The teenager was a four-star prospect recruit and had been playing his college football at Alabama University as a freshman over offers from Georgia, LSU, Michigan, Miami and Oregon. Hall appeared as a freshman for Alabama SOURCE: Instagram.

Hall played his college football as a freshman in the 2021 season. Florida-born is a rising receiver who played in 7 games and recorded four receptions for 72 receiving yards as a true Freshman. Hall also appeared in the 2021 Cotton Bowl Classic games. Presently, along with studies, the American international is preparing for the NFL too. He is the player with the possibility of being an NFL prospect in the future.

Who is Aigye Hall dating? Love life and affairs

When it comes to relationship matters, Hall is very confidential about it. The receiver prefers staying out of the media limelight. Being a private personality, the athlete has kept his life low-key, due to which anything regarding his dating status or love life details is unknown to the public.

On top of that, he hasn't been seen with any girls so far; hence he is probably single. Presently he is dedicated to his career rather than being in a relationship.

Agiye Hall is a first-year student at the University with the possibility of being a future NFL prospect. He is currently focusing on his performance, griding hard to get into the NFL. At the moment, Hall is playing college football, So he has not made quite a money from his college career. 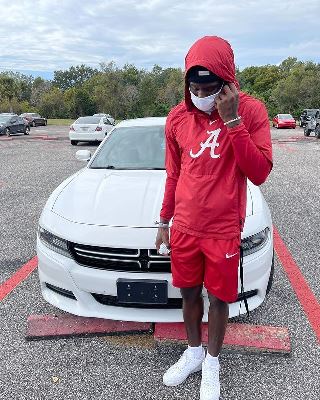 Thus, anything regarding his salary and earnings is not transparent, so we will update you soon when it's available.

Texas Longhorns wide receiver Agiye Hall seems less active on his social media account. The athlete has an Instagram id @_.6xone with more than forty-seven thousand followers. Hall has just 12 posts on his Instagram account. Via Instagram, he out gives his football related news and happenings to the followings.