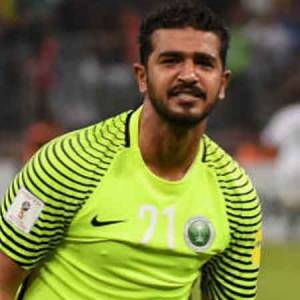 Besides playing for the AI Hilal FC, he has also played for fellow Saudi professional football club, AI Ahli. He made his senior international debut for Saudi Arabia in 2013.

He was interested in playing from his childhood days and joined the youth club of the Saudi Arabian team, AI Hilal in 2004.

His annual salary is estimated to be around  $96,000 with a weekly salary amounting to be around $ 8,000 which he receives from his current Saudi Arabian professional football club, AI Hilal FC.

The Saudi Arabian goalkeeper current market worth is still unknown and is under review. Hence looking at his professional playing career playing for several Saudi Arabian football clubs as well as for his national team, Saudi Arabia, his total sum is estimated to be around $350,000.

After playing for the junior team of AI Hilal, he joined the main team in 2006 and was transferred to fellow Saudi Arabian football club, AI Ahli and made his professional debut in 2009.

He was the part of the successful team that went to win the Saudi Professional League in 2015/16 season as well as King Cup for several seasons.

Abdullah is currently playing for AI Hilal with whom he signed a two-year contract with the club in 2016.

He made his debut for the club against AI Batin and kept a clean sheet on 13 August 2016 and was the part of the victorious AI Hilal that won the Saudi Professional League in 2016/17 season as well as King Cup in 2017.

He made his full senior international debut for Saudi Arabia in 2013 and was included at the  Saudi Arabian preliminary squad for 2018 FIFA World Cup at Russia.

Currently,31, the Saudi Arabian goalkeeper stands at a height of 6 feet  2 inches tall. Talking about his personal life, there is no concrete evidence and information about his past and present relationship.

There is no news about him having any sort of affairs and having a girlfriend and even being married.

He is a professional player and seems to concentrate more on his career and developing his skills on his game rather be involved in any sort of rumors, controversy, and scandals. Hence as per our record, he is possibly single and unmarried.