Abdulelah Al-Malki, the former Al-Wehda product, is an Al-Hilal midfielder currently signed in the Saudi Professional League, the highest football league in Saudi Arabia. He is one of the tasked and consistent midfield for his club and nation. He is known for his playmaking and game vision ability. The Al-Hilal jersey number 26 is a former player of Al-Wehda and Al-Ittihad.

Not to mention, he enrolled at Al-Wehda football academy and played his amateur career there. Abdulelah played a vital role in besting the 2021 Saudi Professional League trophy for his team. What is more, the Saudi nationality capped the 2017 MS League Trophy. For the Saudi National Football team, the professional has made a total appearance in 19 matches.

Abdulelah Al-Malki is among the wealthiest Saudi Professional League player that credits his bank balance to impressive salary figures. His net worth now is around to be $ 1.5 million. As of today, he is having a successful footballing career and has remarked a delightful spot on his team. The playmaker Abdulelah is one of the valuable players on the team. For your concern, the Saudi joined the club in the recent year, due to which the salary numbers he receives from the club are still yet to be transparent. At a minimum, the player in the Saudi Professional League gets $24,640 per year. As he is a well-known talented footballer, his pay must be in the six figures. In addition, the midfielder is an Adidas sportsperson. His endorsement brand, Adidas, pays him quite well for his role as a brand ambassador and promoter of their product. Further, his market value is worth €800K, and his all-time best was in Jan 2022 with a price tag of €2 Million.

Abdulelah Al-Malki is a light brown skin complexion player having a height of 5 ft 9 inches or 1.76m tall. Being a footballer, being physically fit is always the priority, so he regularly hits the gym and keeps his body in the best form. He weighs around 69 kg.

Is He Dating Anyone?

He, and most of his Saudi national teammates, including Mohammed Al-Yami, is the type of person who likes keeping their private matters to themself. Also, he has kept his love life confidential. Consequently, it has made it very difficult to provide evidence of his love life.

Digging his records, we couldn't find any data concerning his relationship. Observing the information, it seems the Saudi hasn't dated any girl. Stay tuned on his Instagram @abdumalki... where he may share these facts in upcoming years.

Coming forth Al-Wehda youth system, he played his first professional game for its first team in 2014. During his five years of tenure with the team, he scored six goals in 84 matches. Ending his contract with the team, he joined fellow club Al-Ittihad in 2019, where he played for four seasons. 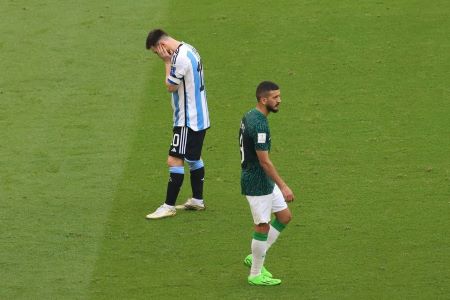 After defeating Argentina in the 2022 FIFA World Cup SOURCE: Instagram

Reportedly, on January 22, 2022, he signed a four-year contract with the rival team Al-Hilal. The player is still yet to make his debut match for his new team.

Abdulelelah Al-Malki full name is Abdulelah bin Saad bin Hameed Al-Wahbi Al-Malki. The former Al-Ittihad player was born in Taif, Saudi Arabia, on October 11, 1994. Abdullah is a career-focused individual who spent most of his time on the ground. The right-footed midfielder measures his height at 5 ft 9 inches and weighs around 69 kg. Coming to his family, he prefers to keep it behind the public eye. Notbaly. Al-Maliki family is Muslim followers and holds a Saudi Arabia nationality.

Stay tuned to Playerswiki for more updates about the athlete.