Aari McDonald is the next big thing in the history of American Women's basketball. At such a small age, she has broken lots of records, made amazing stats, and won numerous awards. Currently playing for the Arizona Wildcats Women's Basketball team, McDonald is the winner of the Ann Meyers Drysdale Award—given to the country's top shooting guard.

Aari McDonald hails from the suburbs of Fresno, California. To this date, she has not revealed her exact date of birth, due to which her precise age is still unknown. Her father's name is Aaron McDonald, and her mother's name is Andrea McDonald. Her mother is a former college basketball player. She is the youngest child of her parents. Apart from her parents, she has five siblings; three brothers named Tre, Anthony, and Aj, plus two sisters named Shinaed and Shayna.

Aari McDonald was into basketball from the age of six. She used to play basketball in the backyard and every other space during her free time. When she went to high school, she continued playing for the high school women's basketball team. 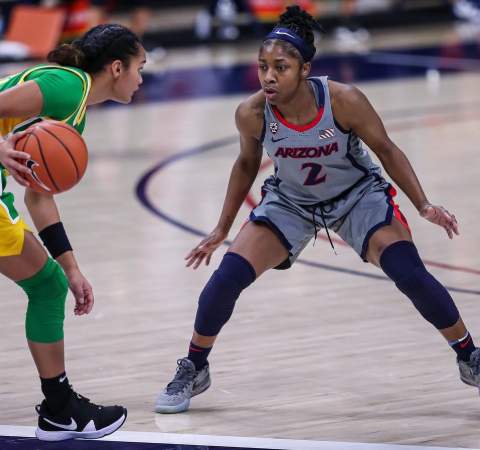 While playing there, she averaged 9.3 rebounds and 26.3 points per game, ranking her in the seventh position by prospectsnation.com and the 51st position in the country. In addition to that, she also had a quadruple-double, six triple-doubles to her name.

In 2016, she went to the University of Washington and played for its women's basketball team. In the 28 games that she played, she started in 21 of them. Also, she averaged 13.7 points per game in the NCAA Tournament. Likewise, she was named one of the top freshman point guards in the country and a finalist for the U19 U.S. World Cup Team. Additionally, she became the third-leading scorer behind WBCA All-Americans Kelsey Plum and Chantel Osahor.

Unfortunately, she missed the whole 2017-18 season due to the NCAA transfer rules. In the 2018-19 season, she began playing for the Arizona Wildcats Women's Basketball team. During her time there, she broke most of the records and got several honorable mentions.

On April 6, 2021, through her social media handle, McDonald announced that she would be entering the 2021 WNBA Draft. As per sources, it is known that she is projected as a top ten draft selection.

Aari McDonald's earnings and net worth are still under review since she hasn't played for some huge money-paying teams. But, as she is entering the 2021 WNBA Draft, it can be sure that she will be earning a huge sum, and her net worth will rise very soon.

The rising basketball star is way past dating as she is a happily engaged woman. McDonald's boyfriend, Devon, proposed to her on March 8, 2020, after Arizona Wildcats' game against Oregon Ducks in Las Vegas—she said yes.

Later, on an Instagram post of November 14, 2020, she posted a lovely picture from their official engagement ceremony. Other than that, she has not disclosed any details of her now-fiance.