Hanyu Yuzuru was born on December 7, 1994, in Sendai, Miyagi, Japan. Regarding his nationality, he is Japanese and belongs to Asian ethnicity. His star sign is Sagittarius.

Hanyu Yuzuru Net Worth And Salary

The net worth of Hanyu is estimated to be $2 million, resulting from an enormous salary from his skating career. Besides, he is also endorsed by the Ghana Chocolate and Citizen watch, through which he earns a tremendous sum. Hanyu has earned a lot of fame and fans for his outstanding skills at the Olympics to date. 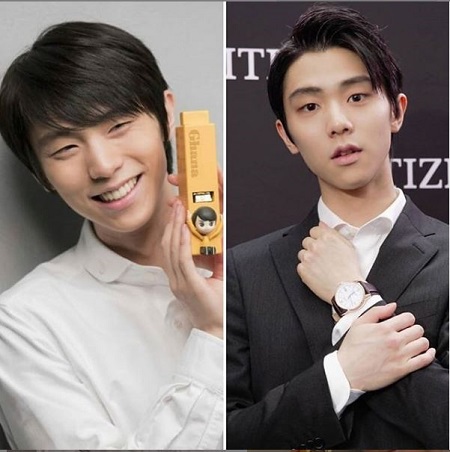 Yuzuru Hanyu is endorsed by the Ghana Chocolate and Citi SOURCE: Instagram @yuzu_yuzuru, posted on SEPTEMBER 4, 2019

With a tremendous net worth, Yuzuru is living a lavish lifestyle.

His name means "a tight bowstring", which symbolizes trust, strength, and straightness.

Hanyu has asthma and often seen catching his breath after his programs. Hanyu loves Winnie the Pooh and is often given stuffed Pooh bears by spectators after his programs have been finished. After the competition, Hanyu often gives mascots to local charities and children.

Yuzuru has no long history of dating. He is currently very concentrated on his work because he is very young. Hanyu is reluctant to speak to the public about his personal life and no details about his probable girlfriend or wife can be found.

Yuzuru was raised alongside his older sister named, Saya, by their parents. His father is a vice-principal of a Junior High School in the Izumi Ward of the Sendai city in Miyagi prefecture while his mother is a housemaker.

Hanyu started skating when he was four years old. He became serious about competing in the sport after watching the duel between the Russian skaters Aleksey Yagudin and Yevgeny Plushchenko at the 2002 Winter Olympics in Salt Lake City, Utah.

After Plushchenko and American Johnny Weir, Hanyu ultimately mastered such difficult elements as the Biellmann spin(being among the relatively few male skaters who made the move) and the quadruple jump.

Hanyu continued to enjoy remarkable success, winning silver medals at the 2011 and 2013 Continent championship and the bronze medal in World Championships in 2012.

In the 2012- 13 season he won a silver medal in the Sochi Grand Prix final. In the 2013- 14 season, which was the last major international competition before the Sochi Games, Hanyu won gold in the Fukuoka, Japan Grand Prix Final. 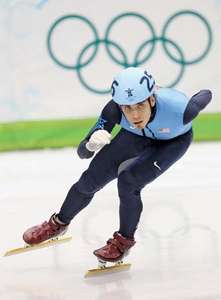 Also Read:48 Years American Olympics Gymnast Skater McKayla Maroney's Earning From Her Profession and Net Worth She Has Achieved

Hanyu set a new world record at the Sochi Games with a score of 101.45 points in the short program, performing a routine that included a spectacular quadruple toe- loop jump and a virtually perfect triple axle; he was the first skater to exceed 100 points in a short program.

Although he stumbled twice in his subsequent free skate, his total score of 280.09 gave him the win over Canada's rival Patrick Chan( 275.62), who won the silver medal.

since 1948, Hanyu was the youngest winner of the Olympic men's skating title, when American Dick Button won the first of his two consecutive titles at the age of 18. Hanyu also took part in the new team event and the Japanese finished fifth in the event. 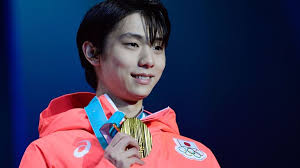 Hanyu poses on the podium during the medal ceremony SOURCE: Sky Sports

A month later, Hanyu returned to the world championships in 2014 and again won a gold medal, being the first male skater since Yagudin in 2002 to win the Olympic and world skating titles in the same year.

Hanyu won a second gold medal in the 2017 World Championships after storming back from fifth place in the short program with a world record free- skating score of 223.30 points.