Gossip Who Is Erling Haaland Dating? Know His Girlfriend

Who Is Erling Haaland Dating? Know His Girlfriend

Coming from a family of athletes, Erling Haaland followed his father's footsteps and laced up his boots. Despite leading life in the middle of the spotlight, Haaland successfully keeps his personal life away from the world. And over the years, the Norwegian footballer gained the attention of soccer fans worldwide! Millions of people know the man, yet except his close loved ones, none of them know about his life away from the sport.

Erling could easily join the modeling industry with his good looks if not for football. The young striker gained a massive opportunity after joining Manchester City in 2022. Haaland already scored fifteen goals in the nine matches he appeared in under the banner of City. And over time, the Norwegian striker gained a massive online following. Currently, the twenty-two-year-old soccer star holds over 19 million followers on Instagram. But, not once has the talented footballer posted about his lovelife.

The love for the sport keeps Erling Haaland away from romance!

As hard as it is to believe, Erling Haaland is currently single. And how can such a handsome hunk be single, you may be asking? Well, it's due to his devotion and love for football or soccer! 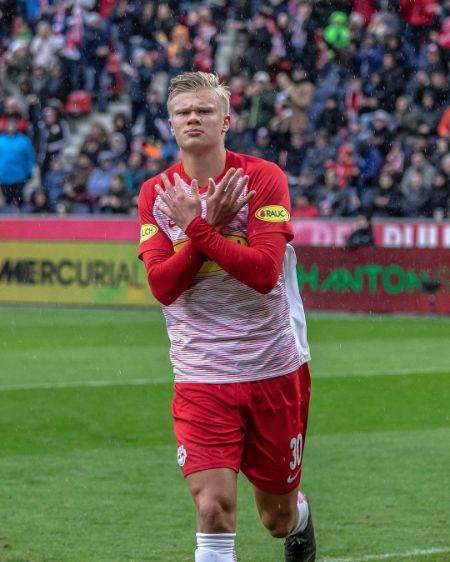 Haaland loves football to the core, and every one of his fans knows this by heart. The exceptional striker spends his time trying to become the best there is. And as a result, Erling doesn't go out of his way to find a girlfriend.

Fans love and adore his fascination with his sport! Erling shares his experiences as a football with his fans, be it on the field or in the locker room. And his pure love for his craft became one of the reasons why soccer fans love the Norwegian footballer. But, Haaland appears hesitant about sharing his romantic relationships with his followers.

Erling Haaland loves his lovelife hidden from the fans.

Erling Haaland isn't shy about the spotlight; in fact, the footballer thrives in the limelight. But Haaland enjoys every bit of privacy that he can afford. And his lovelife comes under the list of things he wants private. Erling Haaland was wearing black sunglasses in his summer wear in the picture. SOURCE: [email protected]

With his looks, any woman would be lucky to call the Norwegian footballer their boyfriend. And his success in the sport guarantees tons of fans throwing themselves at the young athlete. Erling kept his name clean from rumors that would ruin his reputation or dishonor his family. Not only would that drag his name through the mud but also destroy his career, so Haaland stays away from any scandals.

Speaking about the past, Erling keeps his past relationship locked away from the public view. Likewise, no names ever came to light romantically connecting to Haaland.

Erling Haaland experienced one heartbreak in the past!

Staying single till the age of 22 seems mind-boggling, to be honest. As such, it would be safe to assume that the Norwegian soccer player was in a relationship in the past, away from the spotlight. And yes, Haaland was dating a girlfriend in the past. In 2018, however, Erling and his mystery squeeze ended their relationship. 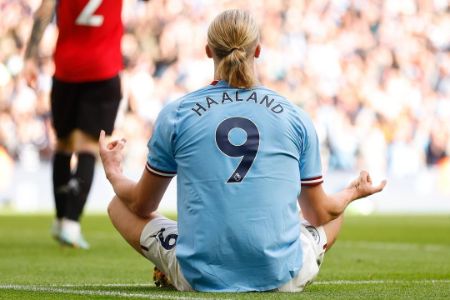 But, unless the Manchester City player talks about his past relationship publicly, which is unlikely, fans of Erling remain speculating and guessing about his lovelife. According to sources, Erling and his ex-girlfriend dated since their teenage. The mystery lady and Haaland shared a brief long-distance relationship, but she later met someone else and broke things off with the footballer.

And after his first heartbreak, Erling kept his heart closed. But he would find love for the sport, filling in the void left after the split with his ex. Likewise, he also stated he sleeps with the five hat tricks balls instead of finding another partner.

Erling Waaland loves spending time with his family when not playing or training!

Erling Waaland avoids sharing about his lovelife but is very open with it comes to his family life. Likewise, he spends most of his off time with the fam. And the Norwegian player shares close bonds with his siblings. 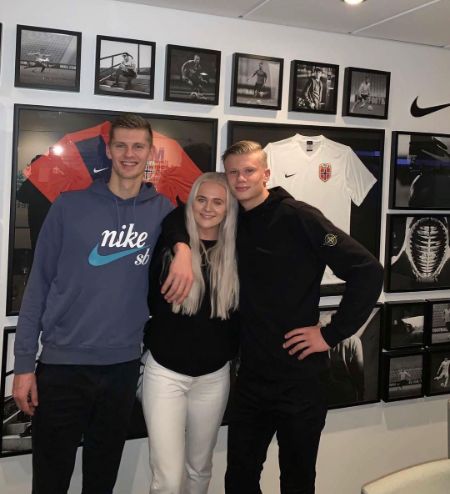 The Waaland family isn't a newcomer to the spotlight. Erling comes from a long line of well-known athletes. He was born to the famous footballer Alfie Haaland. Erling and his siblings grew up in the public eye. His parents, Alfie and Gry Marita Braut welcomed three children, including him.

Haaland grew up with one brother and one sister. Likewise, the name of his siblings is Astor Haaland and Gabrielle Haaland. Although Erling was born in West Yorkshire, England, he moved back to Bryne, Norway, his parent's hometown. And throughout his early life, the young soccer player played different sports. From an early age, Haaland loved football, but he also played handball, golf, and track and field, among other sports.