Wade Ormsby is a well-known Australian professional golf player. He has been playing at the professional level for more than two decades. Wade turned professional in 2001 and started his career in the PGA Tour of Australasia. Wade currently plays in the Asian and European Tour. Ormsby has won four titles, including one European Tour and three Asian Tour.

Wade Ormsby was born on March 31, 1980, in Adelaide, South Australia. Through his successful career, he rose to share a word about his parents and early life. After graduating from High School, Wade enrolled at the University of Houston and played golf. Ormsby stands five feet and nine inches tall and weighs 72 kg.

Wade Ormsby has an estimated net worth of more than $3 Million. A golf player earns a hefty sum through their golf events and sponsors. They do not need to win an event to make their prize money. Ormsby has gained most of his net worth through his European Tour. Wade has already earned €363,885.03 as his prize money in the ongoing season of 2021. 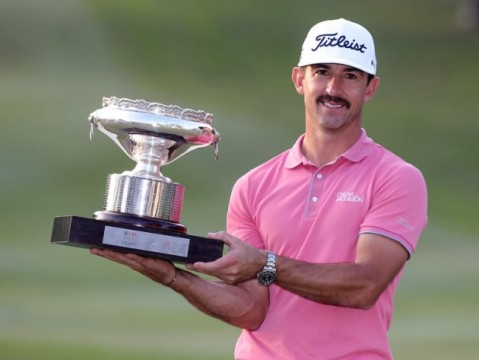 Yes, You read that right. Ormsby is the proud father of two children. Wade was married to his longtime girlfriend, Jenny. The duo walked down their wedding aisle in the late 2000s. They had been dating for several years before their marriage. Jenny holds Swedish nationality and met each other while; The player was on his European Tour. Wade shared a photo with his second wife at the wedding SOURCE: [email protected] Ormsby

Wade and Jenny welcomed their first child, Oskar, shortly after the wedding ceremony. This happy-looking marriage never remained the same, and the two separated and moved on. In 2018, Ormsby married his second wife. He has not shared a word about his second wife. In April 2020, the duo welcomed their only child, Charlie Joy Ormsby.

Wade turned professional in 2001, right after graduating from the University. He made his debut in the PGA Tour of Australiasia and then joined the European tour in 2004. It took home fourteen seasons before winning his first European Title in 2018 at the UBS Hong Kong Open. Ormsby won his first title at the Asian Tour of Panasonic Open India in 2013.

In 2020, Wade won his second Hong Kong Open 2020 by four strokes against Shane Lowry. Ormsby made his PGA debut in the 2021 season and has played in two events.