Swedish professional ice hockey player Viktor Arvidsson is a well known forward for Nashville Predators. Though he was picked by the Predators in the fourth round, as 112th overall picks, in 2014 NHL Entry Draft, he has established himself as one of the most potential right-wingers.

He is equally famous for his feuds with other players in the arena and was praised for his ability to get back at St. Louis Blues' Robert Bortuzzo who had injured him in his previous game. So, today we are here with information on Viktor's net worth and earnings, alongside his contract, stats, and other personal life-related information. So, let's get started.

Nashville Predators Viktor Arvidsson's current Daily Cap Hit is around $22,849. As of 2020, his current net worth has drastically increased and is now worth $15 million, earned as a pro-NHL athlete.

The Nashville Predators' winger Viktor Arvidsson is 27 years old handsome pro-athlete who is married to his former girlfriend Moa Norberg since 2018. The pair reportedly dated for over three years before getting married. 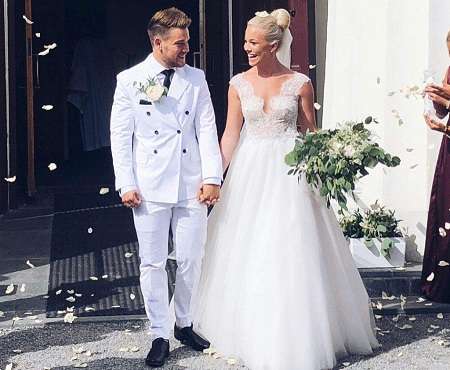 His girlfriend-turned wife Norberg is a hairstylist from Sweden. She was raised in Skelleftea and now lives in Nashville along with her husband Viktor. The family for two also raises an adorable dog named Wilda.

What a summer it was! Got married to the most beautiful women in the world thanks to our family and friends who made it unforgettable!

Arvidsson formerly played in his native Sweden, winning the Swedish Championship twice with Skellefteå AIK in the Swedish Hockey League (SHL). Arvidsson signed a three-year entry-level deal with the Predators on 15 July 2014. On 20 March 2015, the Predators recalled Arvidsson from the Milwaukee Admirals of the American Hockey League (AHL) under emergency circumstances after Colin Wilson sustained a minor injury in practice on 19 March 2015.

Arvidsson made his NHL debut on 21 March 2015, playing 12 minutes and 52 seconds and registering three shots on goal, one hit and one steal in a 3-0 victory over the Buffalo Sabres. On October 8, 2015, Arvidsson scored his first NHL goal.

Throughout the 2016–17 season, Arvidsson scored his first career hat trick, including a short-handed goal, in a 7–4 defeat to the Florida Panthers on 11 February 2017. He ended the season with 31 goals and 30 assists for a total of 61 points, tying him with Ryan Johansen as the top scorers for the Predators.

The Predators re-signed Arvidsson on 22 July 2017 and on 16 January 2018, Arvidsson was placed in the injured reserve to recover from a lower-body injury. He completed the regular season with 61 points to help Predators qualify for the Stanley Cup 2018 playoffs.

Viktor Arvidsson got his revenge over Robert Bortuzzo in his next visit to St. Louis. The Predators forward was hit and bruised by Robert Bortuzzo's while he was doing the double crosscheck in front of the Blues' net. Arvidsson following that injury missed 12 games with a lower-body injury, whereas Bortuzzoo only received a four games suspension.

But when they again met at Enterprise Center, after Nov. 23 in 2020 Arvidsson wasted little time checking in with Bortuzzo what turned out to be a big 4-3 victory for the Predators.