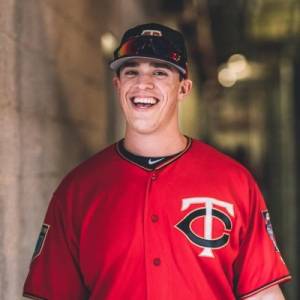 Additionally, he is yet to be married but reportedly is in a romantic relationship with his girlfriend, Kristin Emi Rimbach.

Is Trevor Hildenberger Engaged? Know About his Future Wife

Not everyone is blessed with a long term relationship. However, Trevor Hildenberger is lucky enough in this case as he has been with the love of his life for around 7 years already.

Exploring his official social sites, we came to know that Hildenberger is currently engaged to his future wife, Kristin Emi Rimbach since July 2018. He has been dating his girlfriend since 2012. Also, they seem to be crazy at each other.

Despite being engaged for this long, their wedding date has not been revealed yet.

Despite the busy schedule, Trevor Hildenberger manages to spend time with his love. They are often spotted in different places. The MLB star also found a time to wish his girlfriend on Valentines Day referring to her as a 'throwing partner'.

Happy Valentine’s Day @kristinemi Thanks for always being my throwing partner ??

They both are pet lovers. Talking about his body measurements, the famous MLB star is 1.88 m in height and weighs around 96 kg.

Who is Kristin Emi Rimbach?

Kristin, to-be wife of Trevor, currently resides in Los Altos, CA. Further, Kristin is a food blogger and travel freak and recently, she and her boyfriend, Trevor were spotted relaxing in Japan.

Apart from the mentioned information, there aren't any further details about Kristin in the media yet.

Trevor Hildenberger's Net Worth And Salary In 2019

Trevor Hildenberger so far has made earnings of $1,662,500 from his entire MLB career while David Price is one of the highest earning MLB player with overall career earnings of $184,042,498.

As per 2019 Financial ranking, he stands in 618th position among all the MLB players in 2019. Further, as per the cap hit, he is 23rd best-paid player of Minnesota Twins while Nelson Cruz is the highest earner of the team with an annual salary of $14,000,000.

What Endorsement Deals does Trevor Hildenberger have?

Being a popular athlete, it is obvious that he is linked with different brands. However, he hasn't revealed exact details about his endorsement deals. Moreover, We believe he must be earning a significant amount of money from the brands that he is associated with.

Exploring his social accounts, we found that he is associated with Excess Sports Management which provides a complete sporting package for baseball players. Further, he also wears the official socks of MLB, manufactured by Stance Baseball.

Trevor Hildenberger was born on December 15, 1990, in San Jose, California to parents John Hildenberger and Denise Hildenberger. As per his nationality, he is American and belongs to the White ethnic group. Further, his star sign is Sagittarius.

He played college baseball at Berkeley University of California. He made his professional minor debut with the Gulf Coast Twins that same year before being promoted to the Elizabethton Twins.

The Twins bought his contract from Rochester on June 23, with Hildenberger making his MLB debut same day. Hildenberger allowed a hit in his debut against the Cleveland Indians and struck one in his lone inning.