Travis Green is a former Canadian professional ice hockey player currently serving as a head coach for the NHL's Vancouver Canucks. He is an extremely talented person who was a part of the Canadian National Ice Hockey team that won the 1997 Ice Hockey World Championships.

Born in 1970, Travis Green celebrates his birthday on the 20th of December every year. He is 50 years old and goes by the birth name of Travis Vernon Green. Likewise, he hails from the suburbs of Castlegar, British Columbia, Canada.

When it comes to his family, there isn't much information available on the internet. The former ice hockey player has kept all the details of his parents and siblings up to himself only. Nonetheless, it is known that his parents still reside in Castlegar, B.C., where he spent most of his childhood.

Travis Green started his career as a professional ice hockey player after spending some time playing for his high school and college team. In 1986, he signed a deal with the Spokane Chiefs to play in the Western Hockey League (WHL). He played with the team till 1989 before being traded to the Medicine Hat Tigers, where he played for one year. He recorded 137 goals and 165 assists with the Spokane Chiefs and 15 goals and 24 assists with the Medicine Hat Tigers. Later, he was drafted 23rd overall in the second round during the 1989 NHL Entry Draft by the New York Islanders. But before playing for them, he played for a few seasons with the Capital District Islanders of the American Hockey League.

He began playing for the New York Islanders from 1992-93 and stayed there till 1997-98. During his time there, he played in 388 regular-season games and tallied 92 goals and 145 assists. Around the same time, he was also called up to play for the Canadian National Ice Hockey team. His major accomplishment for the national team was winning a silver medal in the 1996 Ice Hockey World Championships and a gold medal in the 1997 Ice Hockey World Championships.

After his tenure with the New York Islanders ended, he played for different NHL teams such as the Mighty Ducks of Anaheim, Phoenix Coyotes, Toronto Maple Leafs, Boston Bruins, Anaheim Ducks, and Toronto Maple Leafs. The last team that he played for was the EV Zug in the National League. After playing for the 2009-08 season, he decided to take retirement as a player. 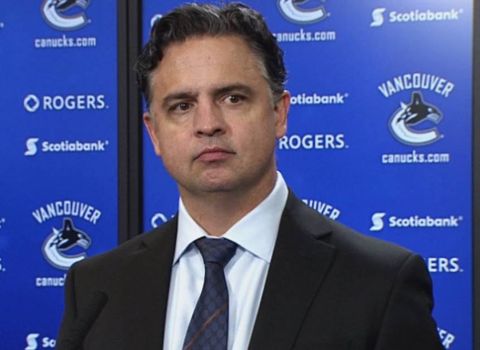 After tallying great records as a player, it was time for Travis Green to shine as a coach. He made his coaching debut in 2008 as an assistant coach and assistant general manager for the Portland Winterhawks. He continued to serve in his assigned position for the team until the head coach plus general manager Mike Johnston was suspended by WHL in the mid-2012/13 season.

He coached the team till the 2016-17 season and took the team to the Calder Cup finals, where they lost to the Manchester Monarchs. After his tenure with the Comets ended, he was signed by the Vancouver Canucks of the National Hockey League as their head coach.

Ever since then, he has been serving as the head coach of the team. During his time, he has led the team to playoffs once. Sadly, the team lost to the Vegas Golden Knights in the second round. He is currently working on improving the team's performance.

Travis Green was able to accumulate a total sum of $18,294,286 during his career as a professional ice hockey player. Likewise, as a head coach in NHL, he is expected to earn a salary of around $2.5 to $3.0 million.

Considering those numbers, it must be sure that the former ice hockey player also has a healthy net worth. As per sources, it is believed that Travis has a net worth of around $5 million.

The 6 feet 2 inches tall Vancouver Canucks head coach relishes a blissful marital life. His wife's name is Sheree Green, with whom he has been married for a long time.

Together, the husband-wife duo is blessed with three children; two sons named Blake and Brody Green, plus a daughter named Jordyn Green. Travis's son, Brody, was diagnosed with Autism when he was only 2-year-old.

Despite the illness, Brody has good health. The family of five has a very harmonious bond, and they reside happily in their lovely home.