How Much Is Travis Blackley's Net Worth In 2021?

Not to mention, he spent most minor league of the MLB team. Talking about his MLB earnings, he has made $575,737 in salary.

Travis Blackley is married to Jenna Blackley. The coupled exchanged the vows on 14th November 2015. 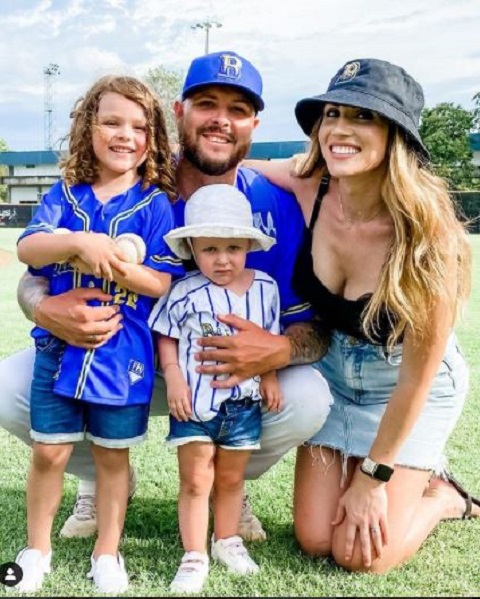 Travis Blackley with his wife and daughter SOURCE: Instagram @ thejerseycollectordtd

On 29th October 2000, the Seattle Mariners was signed by the Blackley as an undrafted free agent.

Soon he began playing with minor league starting with the Single-A Everett AquaSox in 2001. He then played for the Single-A San Bernardino Stampede in 2002, Double-A San Antonio Missions in 2003 the Triple-A Tacoma Rainiers in 2004.

On 1st April 2007, Blackley was traded to the San Francisco Giants and was immediately optioned to Triple-A Fresno. On 23rd September 2007, he made his first major league start since 31 July 2004 against the Cincinnati Reds and won his Giant debut.

Giants later outrighted off him on 6 December 2007 and the Philadelphia Phillies selected Blackley in the major league portion of the Rule 5 draft. At the end of the 2008 spring training, Philadelphia put him on waivers and became a free agent at the end of the season.
On 19th December 2008, the Arizona Diamondbacks signed Blackey to a major league contract but outrighted him to Triple-A Reno on 1st April 2009.

He started 2010 playing for the New York Mets' AAA affiliate Buffalo Bisons. He was released on 2nd May. Later 11 days, he was signed with the Oakland Athletics. Oakland Athletics assigned him to their Triple-A affiliate, the Sacramento River Cats.

In 2011, Blackley played for the Kia Tigers in the KBO League, playing overall 25 games and recording 7 wins and 5 losses with an ERA of 3.48.

In 2012, he returned to San Francisco Giants but signed a minor-league contract.

On 15th May 2012, the Oakland Athletics claimed him off waivers and signed him a minor league contract.

In December 2013, he signed with the Tohoku Rakuten Golden Eagles of Nippon Professional Baseball.

The following year, he played with the Pericos de Puebla of the Mexican League.

In the fall of 2016, Blacey joined Detroit Tigers in a minor league deal. On 1st April 2017, he was released by the Tigers.

In 2017, he returned to the Pericos de Puebla of the Mexican Baseball League.

On 6th July 2017, Blackley signed with the Pittsburg Diamonds of the Pacific Association. He extended the contract with the team for the 2018 season as well.

After that, he played for the Australian Baseball League: Melbourne Aces and Brisbane Bandits.