Tanner Houck is an  American professional baseball pitcher who is signed to the  Boston Red Sox of Major League Baseball (MLB). He finished his collegiate career at the University of Missouri and was selected by the Red Sox with the 24th overall pick in the 2017 MLB draft.

Tanner Houck is engaged to Abby Vazquez. The duo has been together since at least early 2018, as per their respective Instagram accounts.

His fiance, Vazquez enrolled at Western Kentucky University, where she was a Kappa Delta sorority. 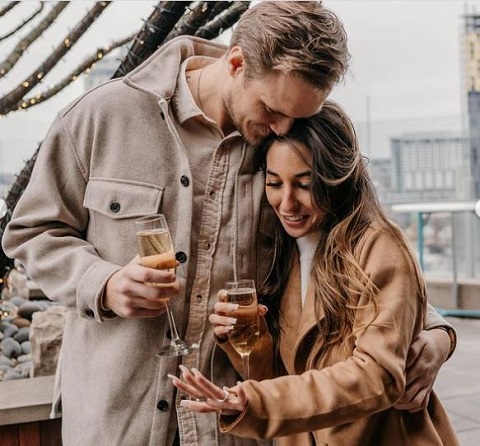 Tanner got down on one knee and proposed on New Year’s Day. They got engaged on 1st January 2021.

Collinsville High School To Unversity of Missouri To MLB Draft

Tanner Houck enrolled at Collinsville High School. With his impressive high school performance, he was drafted by the Toronto Blue Jays in the 12th round of the 2014 MLB draft. However, he did not sign and attended the University of Missouri to play college baseball.

In the 2017 MLB Draft, Houck was drafted by the Boston Red Sox with the 24th overall pick. On 21st June 2017, he signed with the team and soon was assigned to the Class A Short Season Lowell Spinners.

He played in 2018 with the Class A-Advanced Salem Red Sox. He began 2019 with the Double-A Portland Sea Dogs and was promoted to the Triple-A Pawtucket Red Sox on July 13.

On 15th September 2020, he made his MLB debut in a win against the Miami Marlins. Following the 2020 season, Houck was ranked by Baseball America as the Red Sox's number eight prospect.

After the 2020 season, he was ranked No, 8th prospect by Baseball America.

Houck started the 2021 season on Boston's active roster but was optioned to the team's alternate training site on April 7. Though he was recalled to start he was optioned to and recalled from the Triple-A Worcester Red Sox several times during July and August.