Eduardo Rodriguez is a well-known Venezuelan professional baseball player. He has been playing in Major League Baseball for the Boston Red Sox as a pitcher. Eduardo throws and bats left-handed. Rodriguez was part of the World Series championship-winning team in 2018.  Rodriguez made his MLB debut on May 28, 2015. He is the youngest Red Sox pitcher to win his debut on the road since Billy Rohr in 1967.

Eduardo Rodriguez was born Eduardo Jose Rodriguez Hernandez on April 7, 1993, in Valencia Carrboro. He is among the four children born to Magales Rodriguez and her husband. His father works in construction. Eduardo did not come from a reputed family so, much information about his parents is still under the radar. Eduardo stands six feet and two inches tall and weighs 100 kg.

Eduardo Rodriguez's Journey to the MLB

Eduardo started playing baseball from a very early age. He played baseball, soccer, and basketball in his youth. Rodriguez listed his name for the 2010 MLB draft. Baltimore Orioles signed him as an international free agent. He made his professional debut that season with the Dominican Summer Orioles of the Rookie-level Dominican Summer League.

Eduardo played in the minor league for four more seasons. He made his MLB debut tossing 7+2⁄3 shutout innings in Boston's 5–1 victory over the Texas Rangers. Rodriguez became the youngest Red Sox pitcher to make his debut on the road. The Venezuelan player appeared in 21 games (all starts), compiling a 10–6 record with 3.85 ERA while striking out 98 and walking 37 in 121+2⁄3 innings pitched.

In 2016, Eduardo remained out for most of the season after dislocating his kneecap. He appeared in just twenty games. The following season, He again injured his kneecap and played in twenty-five games. In 2018, Rodriguez had ups and downs. At the end of the season, He was part of the World Championship-winning team.  Eduardo finished the 2019 season appearing in thirty-four games. Eduardo extended his deal with the Sox for a year in 2020.

Eduardo Rodiguez is married to his longtime girlfriend, Catherine Rodriguez. The love birds tied their wedding knot in 2012 in front of their parents and some close friends. They had been dating over sometime before their marriage. Shortly after the wedding, The duo welcomed their first child, a daughter, Annie. 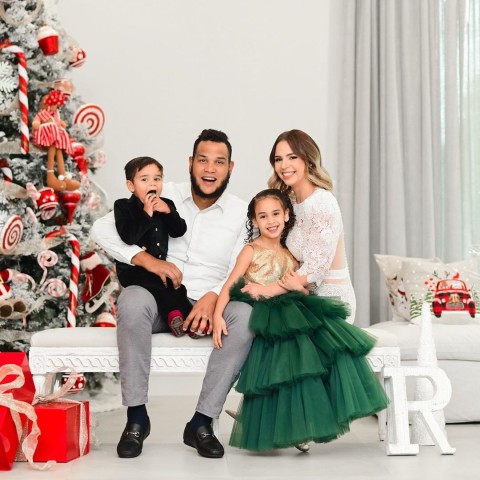 Eduardo along with his family in Christmas SOURCE: [email protected]

In early 2017, Eduardo opened about expecting their second child. In April, The family of three extended to four with Ian Rodriguez's birth. Eduardo is living a happy married life along with his wife and their children.

Know About Eduardo Rodriguez's Salary, Contract, and Net Worth

Eduardo Rodriguez has an estimated net worth of more than $10 Million. He has accumulated most of his net worth through his salary and contract in the MLB. Rodriguez has a salary of $8.3 Million with the Sox. Last season, He earned $3,074,074. In 2010, Eduardo took home $175,000 as his signing bonus with the  Baltimore Orioles. Totaling his career earnings, it sums to more than $19 Million.