Sumona Haque Sumi is a Bangladeshi Fashion Designer & Entrepreneur. Sumona is better known as the wife of an international cricketer and politician who is the former captain in all three formats, Mashrafe Mortaza.

Sumona Haque Sumi was born in the mid 1980s. Sumona has not shared a word about her early life and parents with the public. After graduating from High School, Sumi enrolled at Victoria College and completed her fashion design in BGMEA and SMUCT from (2006–to 2010).

Sumona exchanged her wedding vows along with Mashrafe Mortaza in 2006. The duo had a private wedding ceremony where they had invited only a few members from both the families and some close friends. They had a traditional Muslim marriage ceremony. The love birds had been dating each other for several years before their marriage. As per sources, they first met each other while attending Victoria College. 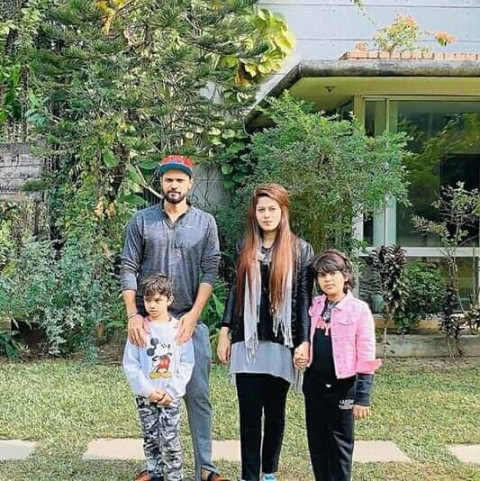 Sumona, along with her husband and children SOURCE: Pinterest

Sumona and Mashrafe are the proud parents of two children, Sahil and Humaira. Although both are active social media users, They do not share much about their children.

Sumona Haque Sumi has an estimated net worth of more than $100,000. She credits most of her net worth to her fashion design career. Sumi works on a project as a Fashion Designer for Mash Clothing Brand. She was invited as a guest at TRESemme Bangladesh Fashion Week in 2019. Sumona must be living a happy lavish lifestyle through her husband's successful career. Sumona shares a photo of her trip to London SOURCE: [email protected]

Sumona's husband, Mushrafe, has an estimated net worth of more than $1 Million. The player has earned most of his net worth through his successful cricketing career. Mashrafe represented Bangladesh National for almost two decades in the international format. The salary of a Bangladeshi player is close to $100,000 at the highest level. A cricket player has multiple sources of income, including sponsorship and advertising fees. They make a reasonable sum from their franchise cricket.

Sumona started working as a fashion designer right after trading from the University. She has been working for almost a decade and has worked with some of the biggest companies in the country. Sumona used to attend her husband's games along with their children.

Mashrafe played numerous sports in his childhood. He represented the schools in football, badminton and cricket. The player went on to play cricket for his college and University. Mortaza made his national team debut in November 2001 against Zimbabwe. The following year, He missed most of the season with an injury. Mashrafe made a comeback in 2004 and became a regular team member.

Mortaza played in a total of thirty-six test matches and took seventy-eight wickets. He appeared in 220 ODI games and scalped 270 wickets. The player made his T20I debut in November 2006 and appeared in fifty-four games. Mashrafe is yet to announce his retirement but has not played games since March 2020 for the national team. Mortaza won a parliament election from the Narail-2 constituency in Dec 2018.