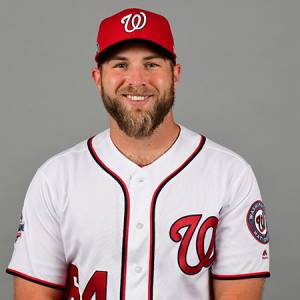 As a Catcher / First baseman, Spencer Kieboom reportedly earns around $555,000 as his yearly salary from Washington National. Further, Spencer Kieboom has an estimated net worth of over six digits.

Is Spencer Kieboom Married? Know About His Personal Life

According to the reports, Spencer is married to his beautiful wife, Christa Kieboom. Further, Spencer was dating his girlfriend for quite a long time and got engaged in November 2016. After almost a year of their engagement, they tied their wedlock on 13th November 2017.

The snow is beautiful for @jdsimms13 and Patience wedding. Not to mention happy anniversary to my lovely wife @cszaboom what a wonderful year it has been being by your side. Love you!

Besides that, being married for this long, the couple hasn't planned for their future baby. It seems like they are enjoying their couple life to the fullest before starting the new phase of life.

Talking about his body measurement, Spencer weighs about 203 pounds and his height is 6 feet 4 inches. Also, he has a world class athlete body.

What Is Spencer Kieboom's Net Worth? Know About His Earnings

Further, the MLB player has an average salary of $555,000 annually which is lesser then Kyle Barraclough's salary. Spencer Kieboom so far has made earnings of $635,628 from his entire MLB career.

His career earnings, including bonus and incentives:

However, the player with such popularity is obvious to be associated with different brands and hence earning a significant amount of money through the deals.

Spencer Kieboom was born on March 16, 1991, in Mount Pleasant, South Carolina to parents Alswinn Kieboom and name of his mother isn't available in the media. As per his nationality, he is Dutch-American and belongs to the White ethnic group.

Further, his star sign is Pisces. He grew up along with his siblings, Carter, and Trevor. Kieboom played college baseball at Clemson University after graduating from George Walton Comprehensive High School. He played in Class A - Short-Season New York - Penn League for the Auburn Doubledays in 2012, batting.258 in 41 games with 20 runs batted in (RBIs).

Kieboom played in the 2014 Class A South Atlantic League for the Hagerstown Suns and spent 2015 in Class A - Advanced Carolina League with the Potomac Nationals, where he played in 71 games and hit.248 with two home runs and 21 RBIs.

In the fifth round of the 2012 Major League Baseball Draft, the Washington Nationals selected Kieboom. After playing in the minor league the Nationals promoted him to the major leagues for the first time on September 27, 2016, after an injury to starting catcher Wilson Ramos.

He started the season with Syracuse in 2018 and appeared with the Chiefs in 25 games, batting.250, hitting a home run and driving in 10 runs while appearing both as a catcher and sometimes as a first baseman.

Later on May 11, the Nationals called him to the major leagues after starting catcher Matt Wieters suffered an injury and went to the disabled list for 10 days.

Currently, he is playing along with his star teammates such as Max Scherzer, Anthony Rendon and many more.