Shane Patrick Victorino is an American retired baseball outfielder who played in the Major League Baseball (MLB) for the San Diego Padres (2003), Philadelphia Phillies (2005-2012), Los Angeles Dodgers (2012), Boston Red Sox (2013-2015), and Los Angeles Angels of Anaheim (2015). Primarily a switch hitter until the 2013 season, he forced to become an exclusively right-handed batter due to various hamstring, back, and knee problems.

Wailuku, Hawaii native, Shane Victorino was born on 30th November 1980, under the star sign Sagittarius. The forty-year-old is an American by nationality and is of white ethnic background.

Shane has made a tremendous sum of money through his 13 seasons long career in the MLB playing for the various team: San Diego Padres, Philadelphia Phillies, Los Angeles Dodgers, Boston Red Sox, and Los Angeles Angels of Anaheim.

Shane Victorino's Wife: Is He Married?

Victorino is currently married to his wife Melissa Smith of over a decade. In November 2009, Shane flew to Hawaii to get married and some teammates, family, and a TV star came along for the ride. And that was not all of sudden. Earlier, he broke the news of engagement on the radio to former Howard Stern enemy, Zookeeper John DeBella. 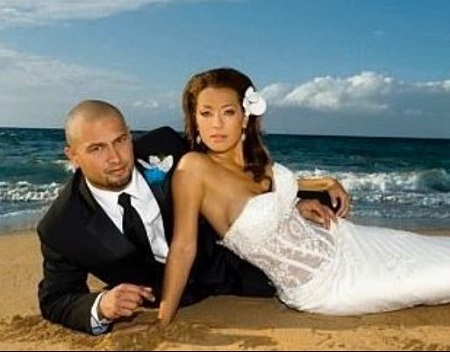 On 14th November 2009, Shane and Melissa tied the knot in his hometown of Wailuku. The wedding was attended by MLB's popular faces Ryan Howard and Jimmy Rollins, MMA brawler Chuck Liddell, and Jon Gosselin.

Shane and Melissa share two children together. On March 30, 2007, they welcomed their first child, a daughter, named Kali'a Makenna Victorino. Their second child, a son Kingston Shane was born on October 1, 2010. The family lives together in Las Vegas.

Shane Victorino was born to Joycelyn Victorino and Mike Victorino. His father is Maui County Mayor and an Eagle Scout who had been the state Representative in Hawai and currently the Supreme Warden for the Knights of Columbus.

Victorino is of mixed ethnic background: Portuguese, Hawaiian, Japanese, and English descent. His last name is of Portuguese origin.

In 2011, in an interview with The Philadelphia Inquirer Shane said: "My name is really Victorine, which is Portuguese. My great-, great-grandpa, when he was in the war, they spelled his name with an O at the end instead of an E, and it became Victorino." On his mother's side, he is a third-generation Japanese.

During Shane's youth, he played baseball, soccer, basketball, and football in his youth and ran track at St. Anthony High School in Wailuku. Ultimately, he signed a letter of intent to play college baseball for the Hawaii Rainbow Warriors. However, Shane later dropped their contract with the college and signed with Los Angeles Dodgers after he was selected by the team on 8th June 1999.

Shane spent 1999 through 2002 seasons, playing in the Dodgers minor league system. In the 2002 Rule 5 draft, Victorino was selected by the San Diego Padres. On 2nd April 2003, he made his Major League debut for the Padres.

On 31st July 2012, he was traded back to the Dodgers. That same year, on December 13, he signed a 3-year, $39 million contracts with the Boston Red Sox. Victorino was traded to the Los Angeles Angels of Anaheim on 27th July 2015.

On July 3, 2018, Victorino announced his retirement. On August 3, 2018, he signed a one-day deal with Philadelphia so he could retire as a member of the Phillies.