Eugene, Oregon native, Scott Harrington was born on 16th November 1980, under the star sign Scorpio. The forty years old holds an American nationality and is of white ethnic background. Regarding his physique, he stands 6 ft, 2 in tall and weighs 175 lbs.

How Much Is Scott Harrington's Net Worth In 2021?

Not to mention, every professional golfer is paid a percentage of the purse for each tournament they play in and finish in the money. Outside the court, they earn from sponsorship and endorsement deals.

Scott and Jenn Harrington tied the knot in December 2016, after meeting through a mutual friend earlier in the decade. 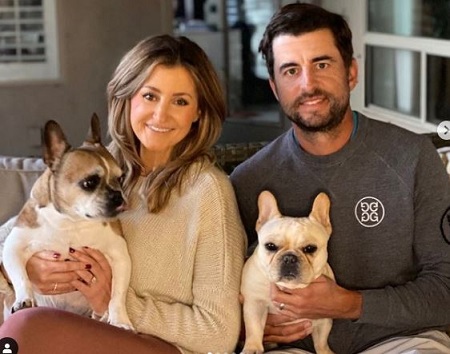 In August 2017, Scott's wifey was diagnosed with Hodgkin’s Lymphoma. She underwent three-and-a-half months of chemotherapy and was declared cancer-free in December 2017. However, on May 11 2018, doctors informed the Harringtons that her cancer had returned. Further, an intense chemotherapy program for two to three months, and from there undergo a bone marrow transplant. Harrington's wife is now improving.

Mr. and Mrs. Harrington does not have their bio child but they are parents to their four legs babies.

Got started in the game by his parents

Scott Harrington is the son of Bob and Mary: both avid golf players. His father, Bob, a former president of the Oregon Golf Association played in the 2003 U.S. Senior Open as an amateur. Reportedly, Scott played the piano for 11 years as well as participated in numerous competitions.

He enrolled at Jesuit High School in Portland, Oregon. Upon graduation, he attended Northwestern University and majored in communication. A Portland native, Scott supports all area sports teams.

In 2004, Scott joined the Korn Ferry Tour, finishing the year No. 108 that year. In 2006, he made PGA TOUR start and also won the Gateway Tour's Desert Series. In 2007, he appeared for a second consecutive year at the Oregon Classic, finishing T75. Further, he played in 16 Korn Ferry Tour events and made just three cuts in the 2008 season.

In 2009, he started three-game, making one cut on the Korn Ferry Tour. The following season, he competed on PGA TOUR Canada as well as made seven of nine cuts.

He missed the 2011 season but came back the following season where he made the cut in five of nine Korn Ferry Tour tournaments and finished the year 69th on the money list. In the same years, he had four PGA TOUR Canada starts in June and July.

In 2019, Scott earned PGA TOUR membership for the first time by finishing No. 19 on the Korn Ferry Tour. In the 2020 season, he was one of eight rookies to qualify for the FedExCup Playoffs and ended the season at No. 98 in the FedExCup standings. What's more? Scott recorded three top-25 finishes and made 11 of 22 cuts, highlighted by a runner-up at the Houston Open.