3X C-USA Coach of the Year, Scott Berry is married and shares two children with his spouse, Laura. Furthermore, his net worth in 2019 is reported $0.7 million.

How Much Is Scott Berry Net Worth and Salary In 2019?

As of 2019, Scott Berry has an estimated net worth of $0.7 million, mostly earned through his coaching career. In 2014, he signed a four-year deal worth $150,000 annually with Southern Miss Golden Eagles baseball team. However, he has not revealed his current salary from the team. 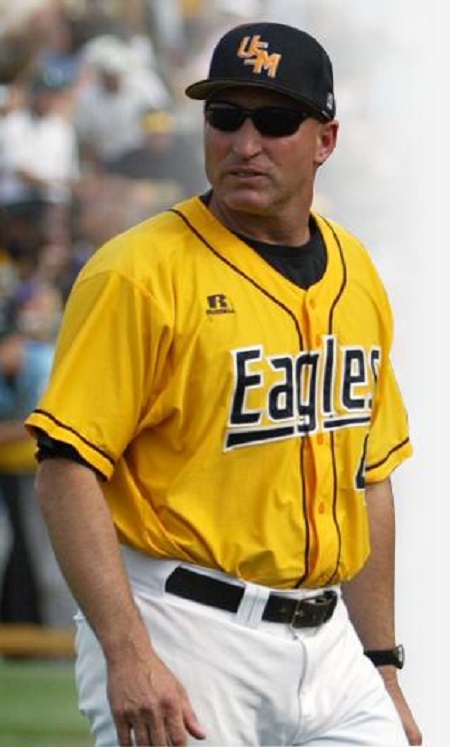 According to the source, a Head Baseball Coach at the University of Southern Mississippi earns an average of $40,440, varying from $38,582 at the 25th percentile to $42,201 at the 75th percentile, with top earners collecting more than $43,939. Compensation is derived from fewer than 20 profiles, including base salary, equity, and bonus.

Besides, there is no information about Berry's real estate properties.

Scott Berry is a married man. He tied the knot with his girlfriend, Laura in a secret wedding ceremony. Together with his spouse, he has two children, Garren, and Kathryn (Kitty Grace). What's more, his wife Laura received her bachelor’s and master’s degrees from Southern Miss in speech communication.

Besides, there is no information about Berry's past affair or girlfriend.

Scott Berry was born on July 20, 1962, in Neosho, Missouri. His star sign is Cancer. As per nationality, he is an American and is of white ethnic background. He is the son of Marilyn Berry and the late James Berry.

Upon high school graduation, he enrolled at Crowder College. After two all-region seasons as a catcher, he was forced to quit baseball due to back issues. After that, he transferred to Southwest Missouri State where he finished his degree and became an assistant student coach.

In 1991, Berry was hired as an assistant at Meridian Community College, working under Corky Palmer who would precede him at Southern Miss. After six seasons working as an assistant, Berry became head coach at Meridian. There he remained for four seasons, earning numerous coach of the year awards. Furthermore, he led Meridian to their first National Junior College World Series in 1998.

While at the helm, his teams were ranked in the top 10 all four years and placed 25 players at Division I schools as well as coached nine future professional players. Then, he rejoined Palmer with the Golden Eagles as an assistant coach at Southern Miss.

Additionally, he worked in several roles, including a hitting coach, pitching coach, and associate head coach before becoming a head coach in 2010.