Sarah was born Sarah Hawley Schmelzel on May 12, 1994, in Phoenix, Arizona. She is the daughter of Dennis Schmelzel and his wife, Amy Schmelzel. Sarah has not shared much about her early life and her parent's profession. Schmelzel graduated from Xavier Preparation High School and then enrolled at the University of South Carolina.

Sarah Schmelzel has an estimated net worth of more than $500,000. Sarah is very much early in her career and shall be earning much more in the future. A golf player makes as per the score at the end of the events and earns a reasonable amount through their sponsorship and advertising deals. Last season, Sarah earned $198,601 from fifteen LPGA events and made cuts in twelve of them.

In 2019, Sarah took home $251,284 while playing in twenty-five events. She made cuts in twenty games and her best finish of sixth at the Cambia Portland Classic. Also, Schmelzel played in the Symetra Tour in 2017 and earned $8,119 from thirteen events. The following season, Sarah played in twenty-one events and earned $57,584. She recorded five top-10 finishes, including a season-best T3 result at the Symetra Tour. Totaling his earnings from the LPGA tour is sums to $569,237.

Sarah's Career in the LPGA

Sarah started playing golf at the age of five. She on medalist honors at the 2011 Arizona State High School Championship. She led Xavier Prep to its third team state title in four years. In addition, Sarah was a three-time national collegiate player of the year at Duke. After graduating from High School, Schmelzel was part of her University golf team. Sarah proved to be one of the Gamecocks' top golfers. At the end of the season, She was named to the SEC First-Year Academic Honor Roll. 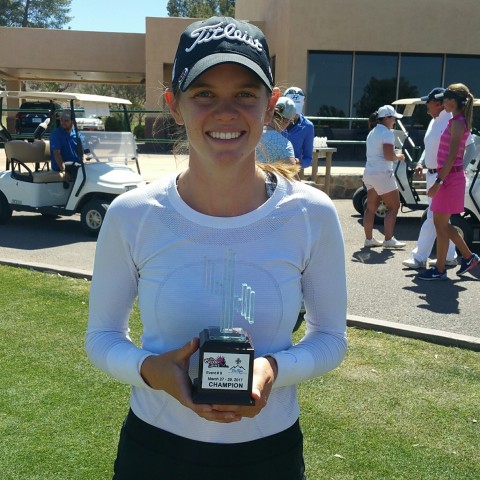 Sarah Schmelzel along with a Tour Title SOURCE: The State

In the sophomore year, Sarah played in all eleven tournaments. She finished the season with a scoring average of 74.00, which ranks third among sophomores in program history. Schmelzel remained out of the game for her early season at the junior year for the junior year. However, she was one of four Gamecocks in the top 25 as the team captured the NCAA East Regional title. Sarah played in all the tournaments for the senior year and ended her collegiate career with the fourth-lowest career scoring average (74.25) in program history.