Sandy Koufax is a former professional baseball left-handed pitcher who played his entire career (12 seasons) for the Brooklyn / Los Angeles Dodgers of Major League Baseball (MLB) from 1995 to 1996. Besides, he was also the youngest player ever elected to the Baseball Hall of fame when he was 36 years old.

This seven times All-Star player, Sandy, was born on December 30, 1935. He is an American by nationality and belongs to the white ethnic background. He is currently married to his third wife, Jane Purucker Clarke. This capsule discusses all inside out of this former player. So stick with us till the end to know more about Sandy Koufax.

After retirement as a player, he pursued a career in sports journalism. In 1967, he inked a 10-year contract with NBC to be a broadcaster on the Saturday Game of the Week for $1 million, which is equivalent to $7.7 million in present value. Later six-year he quit the job.

He owns a house in Vero Beach, Florida, Us.

Aforementioned, the former MLB player, Koufax, has married thrice. He first tied the knot with Anne Widmark, daughter of movie star Richard Widmark, in 1969. The couple shared 13 years of married life; however, divorced in 1982.

Later three years, he married Kimberly Francis, a personal trainer. Like his past marriage, his 2nd conjugal life did not last long, and the couple parted ways in 1998. 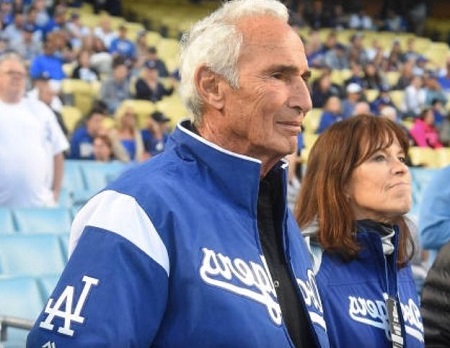 He then exchanged the vows with Jane Purucker Clarke. As a matter of fact, Koufax has no biological children.

Sandy was born to Jack Braun and Evelyn Lichtenstein. His parents divorced when he was three, and his mother eventually married another man, Irving Koufax, who adopted Sandy. Later the family relocated to Long Island, and they moved back to Brooklyn, before Sandy's 10th grade.

Koufax enrolled at Brooklyn's Lafayette High School, where he was better known for basketball than for baseball because, at the time, school sports were not available.

In 1951, while still playing basketball, Koufax also joined a local youth baseball league known as the "Ice Cream League."  While playing first base for the school's team, he was spotted by Milt Laurie, a baseball coach, who recruited Sandy to pitch for the Coney Island Sports League's Parkview.

Upon graduation, he joined the University of Cincinnati. However, he played basketball during freshman year, but in spring 1954, he made the college baseball varsity team.