Ryan Nugent-Hopkins is a Canadian professional ice hockey player who is currently signed to the  Edmonton Oilers of the National Hockey League (NHL), playing as a center as well as serving as an alternate captain. He was picked first overall by the Oilers in the 2011 NHL Entry Draft.

Burnaby, British Columbia native, Ryan Nugent-Hopkins was born on 12th April 1993, under the star sign Aries. He is the son of Roger Hopkins and Deb Nugent. He has an elder brother, named, Adam Nugent-Hopkins and one half-brother, Rick Hopkins. The twenty-eight years old holds Canadian nationality and is of white ethnic background. He stands 6 ft 0 in (183 cm) tall and weighs 184 lb (83 kg; 13 st 2 lb).

How Much Is Ryan Nugent-Hopkins Net Worth In 2021? Salary & Contract

On 2nd July 2011, Ryan Nugent-Hopkins signed a 3 year $11.325 million contract with Edmonton, which happens to be his first NHL contract.

Ryan Nugent-Hopkins is married to Breanne Windle. Reportadely, the duo met back in 2012 and started dating soon.

In April 2018, Nugent-Hopkins went down on knees asking Breanne Windle to marry him. The answer was YES!! The following year in In July 2019, they tied the knot in Maui,Hawaii. 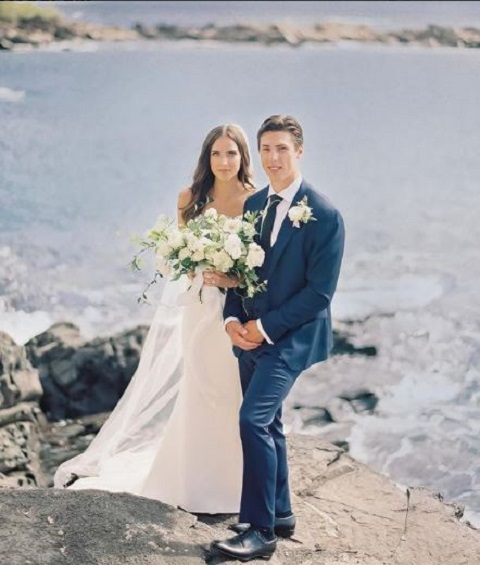 As a matter of fact, the NHL player is a quite confidential person when it comes his his personal life. His wife on the contrary is a open book and has shared every bit of their lovestory via pictures on Instagram.

While enrolling at  Burnaby North Secondary, Nugent-Hopkins began playing for minor ice hockey for the Burnaby Winter Club in his hometown. With Burnaby, he played in the 2005  Quebec International Pee-Wee Hockey Tournament, leading the team to a quarter-final berth, and later in the season captured a provincial championship.

Further, he played in the Western Canada Bantam Championships in 2007-08.
During the 2008-09 WHL season, Nugent-Hopkins made his WHL debut with the Rebels as an underage player. He appeared in five games, recording 2 goals and 4 assists.

The following season, he was awarded the WHL rookie of the year award as well as a finalist for the CHL Rookie of the Year Award.

Nugent Hopkins was ranked 6th over by the International Scouting Service for the  2011 National Hockey League (NHL) Entry Draft.

On 24th June 2011, Nugent-Hopkins was picked by the Edmonton Oilers in the 2011 NHL Draft with the first overall pick. On 2nd July 2011, he signed a three-year deal with Oilers.

On 9th October, he made his NHL debut in the team's first game of the 2011–12 season, a shootout win over the Pittsburgh Penguins. He set a record for the earliest career hat trick in fewest career games, breaking Gord Sherven's record from 1984 by a margin of two games in Nugent-Hopkin's first season.

On 19th November 19, 2011, Nugent-Hopkins had five assists against the Chicago Blackhawks, with a final score of 9–2, he became the first 18-year-old in NHL history to do so. Further, he was also only the 4th 18-year-old player ever to scored five points in a single season game.

On 29th June 2021, Nugent-Hopkins agreed an eight-year, $41 million contract extension with the Oilers.