Ryan Mountcastle is a rising American professional baseball player. He is currently playing in Major League Baseball for the Baltimore Orioles. Ryan plays as a first baseman for his team. Mountcastle started his career playing in the Florida Complex League Orioles for the Gulf Coast League.

Ryan Mountcastle was born Ryan Lee Mountcastle on February 18, 1997, in Winter Springs, Flordia. He is among the two children born to her biological parents. Ryan has a sister, two step-brothers, and a half-brother. Mountcastle has not shared much about his parents. Ryan graduated from Hagerty High School and enrolled at the University of Central Florida. Talking about his physical appearance, Mountcastle stands six feet and four inches tall and weighs 88 kg.

Ryan started playing baseball from a very early age. His father remains his biggest source of inspiration. He was part of his High School baseball team. In 2015, Mountcastle listed his name for the 2015 MLB draft. Baltimore Orioles drafted him in the first round. Shortly after the draft, He signed with Gulf Coast League Orioles and played in forty-three games, batting .313 with three home runs and 14 RBIs. Ryan plays in the MLB for the Baltimore Orioles SOURCE: Baltimore Sun.

Mountcastle spent the 2016 season with Delmarva Shorebirds and posted a .281 average with ten home runs and 51 RBIs, along with a .745 OPS in 115 games. Ryan was ranked as Baltimore's third-best prospect going into the 2018 season. The following season, He was named the International League Most Valuable Player. Ryan made his debut in the Major league in August 2020. Mountcastle had his first major league hit against the Boston Red Sox in the bottom of the 9th inning.

In early 2021, Ryan was named AL Player of the Week after hitting safely in all six games he played in.  Mountcastle had his first career three-home run game against the Toronto Blue Jays. In July 2021, He was named in the American League Rookie of the Month.

Career Earnings, Contract, and Net Worth

Ryan has an estimated net worth of more than $1 Million. He has accumulated most of his net worth through his short career in the MLB. In 2015, Mountcastle took home $1.3 Million as his signing bonus. In 2020, The player received $118,370 as his salary with the Orioles.

Who is Ryan Mountcastle Dating? Know About His Relationship Status and Girlfriend

Ryan is an active social media user. He keeps sharing a lot of his photos in his Instagram timeline of 10.2k followers. Following his timeline, we can be sure that Ryan is involved in a romantic relationship with his longtime girlfriend, Taylor Scalora. Mountcastle first posted with his girlfriend in November 2015. 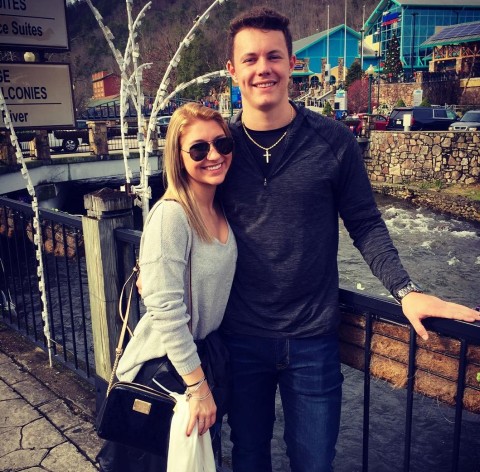 Ryan shares a photo with his girlfriend, Taylor, at a vacation SOURCE: [email protected]

It seems like both of them first met each other in High School and have been together since then. Taylor is very supportive of her boyfriend. Scalora keeps attending her boyfriends game.