Ryan Armor is a well-known American professional golf player. Armour has been playing in professional events for more than two decades. Ryan turned professional in 1999 and currently plays under the PGA Tour events. Armour has won two significant events PGA tour and Korn Ferry Tour, in his professional career.

Ryan Armour was born Ryan Patrick Armour on February 27, 1976, in Akron, Ohio. He is the son of David Armour and his wife, Jude Armour. His father was a businessman. Ryan has a brother named Mike Armour. Armour graduated from Walsh Jesuit High School and enrolled at Ohio State University. Armour stands five feet and nine inches tall and weighs 77 kg.

Ryan Armour's Net Worth in Millions 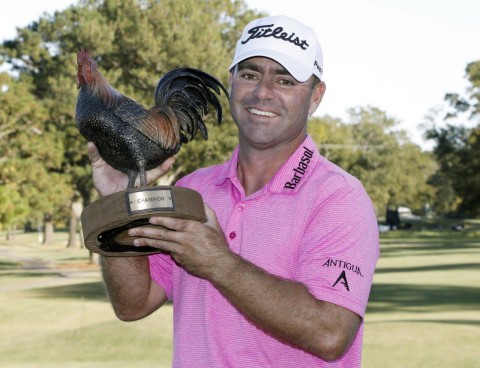 Ryan shares a photo with his first and only PGA title SOURCE: PGA Tour.

Ryan is a married man living a happy married life along with his wife and children. Ryan is married to his longtime girlfriend, Erin Armour. The love birds have been married for more than five years. Ryan and Erin are proud parents of two children. He is not active on social media and does not share much about his personal life.

Ryan started playing golf from a very early age. He played golf from the Ohio State University and earned third-team All-American honors in 1998. Armour lost the 1993 U.S Junior Amateur Golf Championship final to Tiger Woods. Ryan turned professional in 1999, playing in the Nationwide Tour. In 2004, He joined Korn Ferry Tour and played there until 2006.

In 2007, Ryan made his PGA debut. However, He lost his PGA Tour card and had to go back to the Nationwide Tour for 2009. In 2016, Armour won his first professional event of the Web.com Tour at the Panama Claro Championship. The following season, The American player won his first and only PGA title at the Sanderson Farms Championship.