Peter Siddle is a well-known Australian cricket player. He is currently playing in the domestic league for Tasmania. Siddle plays as a right-arm fast-medium bowler. Peter started his professional career in 2008 and was named the ICC Emerging Player of the Year. He retired from international cricket in December 2019.

Peter Siddle was born Peter Matthew Siddle on November 25, 1984, in Morwell, Victoria. He is the son of Steve Siddle and his wife, Allison Siddle. Much about his parents and early life is under the radar. Siddle spent his early childhood playing cricket for the Latrobe Cricket Club. Talking about his physical appearance, Peter stands six feet two inches tall and weighs 85 kg.

Peter Siddle's Net Worth in Millions

Peter Siddle has an estimated net worth of more than $2 Million. A cricket player has multiple sources of income, including sponsorship and advertising deals. Peter is pretty private about his economic career. He has not shared much about his salary and contracts with the public. The Australian cricket player must have earned a reasonable sum from his job. 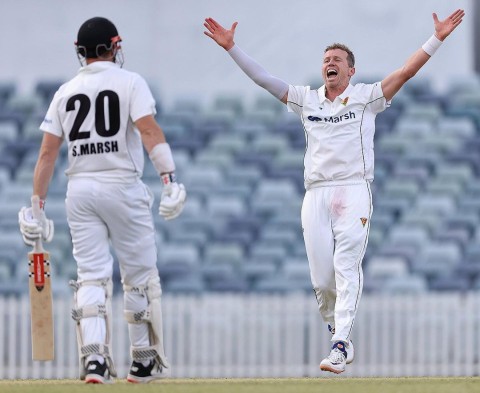 Peter was part of the Big Bash League for two clubs, Adelaide Strikers and Melbourne Renegades. The base salary of a player currently playing in the BBL is more than $42,000. Nathan Lyon earned $195,000 as his salary in the 2021 season while playing with Sydney Sixers.

Who is Peter Siddle Married Too? Know About His Relationship Status and Children

Siddle is an active social media user and is very open about his relationship status. Peter walked down his wedding aisle with  Anna Weatherlake in 2017. They had been dating each other for six years before their marriage. The duo got engaged in 2015 and shared the news through their posts on social media accounts. The love birds had a private wedding ceremony in front of close friends and family members. Although, It's been four years of their marriage and ten years of their relationship, They are yet to add a new member to their family. Peter owns several dogs and likes to spend his free time with them.

Peter started playing cricket with his siblings and parents in his home. He joined Latrobe Cricket Club, attended the Australian Cricket Academy, and made his first-class debut playing for Victoria in 2003. Siddle earned his national team call in 2008 and made his Test debut at the Punjab Cricket Association Stadium in Mohali in October 2008.

Peter made his ODI debut in February 2009 against New Zealand. In his career of more than a decade, He played in sixty-seven test matches and took 221 wickets. Siddle became a household name after becoming the ninth Australian to take a Test hat-trick and the first Australian since Shane Warne in 1994-95. Peter announced his international retirement, effective immediately in December 2019. The player plays for Tasmania in the domestic league.