Pat Perez is a well-known American professional golf player. He has been playing in the professional league for more than two decades. Perez turned professional in 1997 and played under the PGA Tour. Pat has won four major titles, including three PGA tours and one Korn Ferry Tour.

Pat Perez was born Patrick A. Perez on March 1, 1976, in Phoenix, Arizona. He is the son of Tony Perez and his wife. Pat is of Mexican-American descent and holds American nationality. Perez has a brother named Mike Perez. After graduating from High School, Perez enrolled at Arizona State University and turned right after graduating in 1997. Pat stands six feet and weighs 86 kg.

Pat Perez has an estimated net worth of more than $20 Million. He has accumulated most of his net worth through his successful career of two decades in golf. Perez is ranked at No.51 in the All-time Money List Leaders with total prize money of $28,490,201 from golf. Also, He must be making a good amount through his sponsorship and advertising deals. 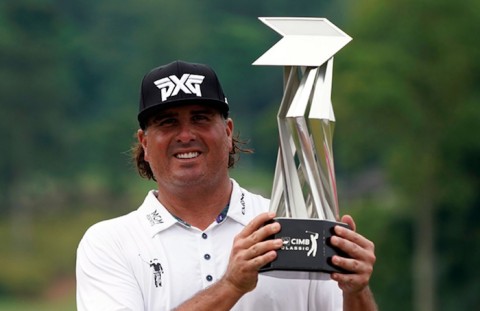 Pat made $1,451,726 in his rookie year of the PGA. The following season, He took home $578,141 while appearing in thirty-three games. In the following year, Perez has been making an average of a million from each season at the PGA Tour. In the 2016/17 season, The American golfer made $4,361,400 while appearing in just twenty-six events and winning an event. This season's earning remains as his highest-earning in a single season to date.

Pat won another PGA Tour the following season but only made $2,962,641 at the end of the season. In the ongoing season of 2021, Perez has already earned $770,114 from twenty-seven events. Last season, He appeared in just eighteen events but made $1,010,905 when he made cuts in twelve games.

Father of a Children

Pat is the proud father of a daughter. Perez is married to his longtime girlfriend, Ashley Perez. The love birds walked down their wedding aisle in 2015. They had a private wedding ceremony where they had invited only a few members from both the families and some close friends.

Pat and Ashley had been dating each other for several years before tying their wedding knot. In mid-2018, Pat opened about expecting a baby with his wife, Ashley. In September 2018, The duo welcomed their first child, a daughter, Piper Perez. The family of three is living a happy life.

Pat played golf for the Arizona State University and turned professional in 1997. It took him nine years to win his first PGA Tour title at the Bob Hope Classic after making his PGA debut in 2001. He started his career playing on the Buy.com Tour and Asian Tour. Perez has also won an event at the Asian Tour.

Perez spent much of the 2015–16 season out of golf after shoulder surgery. Pat won his second PGA Tour title in 2016 at the OHL Classic at Mayakoba by two stoke against Gary Woodland. The following season, He won CIMB Classic with four strokes against Keegan Bradley. Pat reached his career-high ranking of No.16 in January 2018.