Niklas Kronwall is a Swedish professional ice hockey player who plays in the National Hockey League (NHL). As of 2019, Niklas Kronwall currently plays for the Detroit Red Wings as their Defence. Niklas Kronwall has played for other teams like Djurgårdens IF.

As a Defence, Niklas Kronwall reportedly earns around $1,750,000 as his yearly salary from Detroit Red Wings. Further, Niklas Kronwall has an estimated net worth of over $30 million. He is currently dating his girlfriend and has a child with her.

Niklas Kronwall's Net Worth and Salary

Kept aside Niklas Kronwall financial earnings, his personal assets includes a home and cars. Moreover, he earns a good amount from various sponsorships.

Niklas Kronwall is in a relationship with his girlfriend, Katinka Andersson. Niklas is not married to his girlfriend but the couple is blessed with a son named Douglas Kronwall. Niklas and Katinka are together for about a decade and had their child in 2014.

His girlfriend is a Swedish and is originally from Ystad, Sweden. They met each other at a party thrown by their mutual friend.

So far Niklas is living a happy life with his longtime girlfriend and his son and might be planning to get married soon since there aren't any rumors which suggest that they are split.

Katinka left her personal trainer job after having an affair with Niklas and they have been together for over ten years. Some of the websites mentioned that Niklas was dating a girl named Lena before dating Katinka.

The NHL star is 6 feet in height and weighs around 88 kilograms. Niklas Kronwall is not only a world-class athlete but also has a very attractive individual.

Niklas Kronwall was born on 12 January 1981, in Stockholm, Sweden to parents Hasse Kronwall and Tove Kronwall.

As per his nationality, he is Swedish and belongs to the White ethnic group and his star sign is Capricorn. He grew up along with his brother Staffan.

Niklas started his NHL career with the Detroit Red Wings after being drafted in the 2000 NHL Entry Draft in the 29th overall pick. During 2010 season, he helped his teammate Chris Osgood to get his 400th win since he scored the game-winning goal against Colorado. 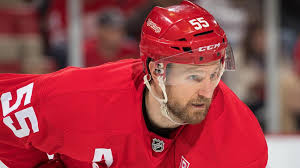 Niklas is one of the oldest players in the NHL history who has been playing since 2000 and in the 2017-18 season, he completed his 800th game. Besides his NHL career, he also played in the Swedish National Team in several tournaments.

Currently, he is playing alongside famous right winger Gustav Nyquist.