Nicklaus M. Madrigal a.k.a. Nick Madrigal is an American professional baseball second baseman who is signed to the Chicago Cubs of Major League Baseball (MLB). Initially, he was drafted by the Cleveland Indians in the 17th round of the 2015 MLB draft, after his high school career at Elk Grove High School. Rather than going professional, he played college baseball for Oregon State University.

Sacramento, California native, Nick Madrigal was born on 5th March 1997, under the star sign Pisces. The twenty-four years old holds an American nationality and is of white ethnic background. He is the son of Mike Madrigal and Angie Day. Further, he has a  twin brother, Ty, who played college baseball at Saint Mary's College of California.

How Much Is Nick Madrigal's Net Worth In 2022? Salary & Contract

On 4th June 2018, Nick signed to Chicago, receiving a signing bonus of $6,411,400. Before playing in the MLB in 2020, he played in minor league two seasons earning a decent salary. According to the source, the minor league player's salary is $14,000 for their five-month season. Minor leaguers are not paid during the offseason or for spring training.

In the 2020 season, he made$575,000 from Chicago White Sox. In 2021, his salary is expected the same figure since there is no news about a contract extension. Yasmani Grandal, Dallas Keuchel, and Jose Abreu are the highest-paid roosters of the team.

As of 2022, his net worth is approximately $5 million. Besides, there is no other financial information about him.

Who is Nick Madrigal's Girlfriend?

Chicago White Sox – No. 1 is currently dating his girlfriend, Alisa Sandgren. His bae Sandgren is an alum of Fisher College of Business. Unlike other wags, Sandgren tries her best to maintain distance from the media. Though she has set her IG private, her boyfriend often features her on Nick's IG. Well, he never forgets to wish Valentine or birthday giving an IG shoutout. 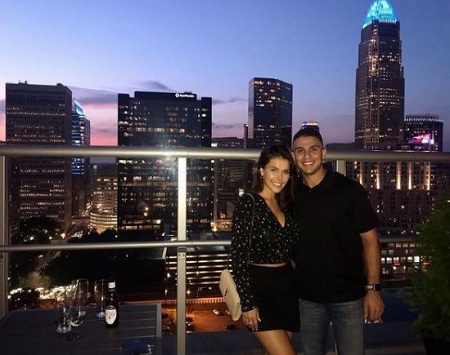 In April 2018, Nick made his relationship with a lovely photo of them which he captioned, "Thankful for you." The pair is believed to has dated since.

In the 2018 MLB draft, Nick Madrigal was picked 4th overall by the Chicago White Sox. Soon he was assigned to the AZL White Sox before being promoted to the Kannapolis Intimidators in July. The following month, he started at the Winston-Salem Dash. To begin 2019, he returned to Winston-Salem and was promoted to the Double-A Birmingham Barons in June.

On 31st July 2020, Madrigal was promoted to the major league. He started at second base and batted ninth against the Kansas City Royals.  After the 2020 season, he underwent surgery to repair his separated shoulder.