Jose who played in the MLB for 6 seasons has an estimated net worth over $50 million which is entirely generated from his professional career. Also, he has collected $73,855,000 as entire career earnings. Besides, he is a married man and currently, he is married to his beautiful wife, Maria Abreu. To know more about Jose's personal life, relationship status, and professional career. Make sure you stick with us until the end.

Jose Abreu Earnings; How much is his Net Worth?

Soe of Jose's career contract and earnings are tabulated below:

In 2019, Jose is expected to earn a base salary of $16,000,000 and an incentive bonus of $15,000, while carrying a total salary of $16,015,000. Moreover, Jose also earns an additional amount of cash via endorsement deals and commercials but unfortunately, the details about the brand he is associated with and the earnings from them are not in the media yet.

Furthermore, the information regarding Jose's assets like cars and house are not in the media yet. However, he is one of the best-paid player in MLB who is obvious to have an expensive car and luxurious house.

Is Jose Abreu Married? Know about his Personal Life in details

Jose Abreu is enjoying a marital relationship with his beautiful wife, Maria Abreu. Sadly, we didn't find the deatils about their wedding but the chemistry they share suggests that it's been quite a long time of their relationship.

Besides, the couple is parents of a single son whose details are still out of reach of media. 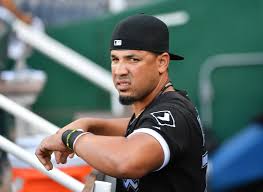 Talking about the couple's early life, they had to defect Cuba with their son. Moreover, the duo doesn't prefer to talk about their past as they find hard to accept the situation that they had to leave family and friends.

During the time, the united states embargoed Cuba and in one of his interviews, he said that he ate the first page of his fake Haitian passport while he was traveling to Miami via airways.

Jose was born on January 29, 1987, in Cruces, Cienfuegos, Cuba to mother, Daysi Correa but the details about his father is not revealed. He is Cuban born and belongs to the mixed ethnic group.

Also, Abreu was born under the star sign, Aquarius. Furthermore, the details about his amateur career are not in the media yet but some source claims that he started his playing career since his early childhood.

Moreover, he signed his first professional contract on OCT 29 2013 of worth 6 years $68 million with Chicago (CHW).

Soe of his career highlights and achievements are: