An American professional baseball player Nicholas Castellanos currently plays as a right fielder for the Philadelphia Phillies of Major League Baseball (MLB). He mostly played third base and right field. Earlier, he had stints with the Detroit Tigers, Chicago Cubs and Cincinnati Reds.

Castellanos appeared in the 2012 All-Star Futures Game and was named the Most Valuable Player of the contest. On 1st September 2013, he made his MLB debut. Castellanos was married to Vanessa Hernandez and has a son from their relationship. As of now, he is dating Jess Gomez.

Nicholas Castellanos Net worth and Salary in 2022

Nicholas Castellanos currently has an estimated net worth of over $8 million, as of 2022. Castellanos earns a good sum of money from his career as a professional baseball player. Thus far, he has summoned $43,942,249 as his MLB career earning, playing 9 seasons long.

On 17th January 2018, Castellans signed one year contract with Tigers for $6.05 million including the signing bonus, base salary as well as an annual salary. He is living a lavish life with his spouse and son.

Nicholas Castellonas was previously married to Vanessa Hernandez. The couple exchanged their vows in 2015. From their relationship, the pair has a son named Liam born in August 2013. Even being the parents of a child, the duo failed to continue their relationship and divorced in 2016. 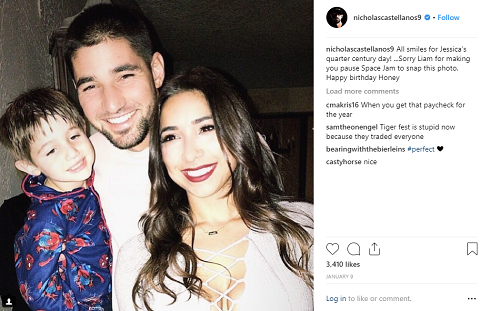 Nicholas Castellanos with his girlfriend and son SOURCE: Instagram

Currently, Castellanos is in a relationship with his girlfriend Jess Gomez. However, neither Castellanos nor Jess hasn't revealed when they began dating. The couple is supportive of each other. They often spend their time together and further share photos of each other on their respective Instagram accounts.

Although the lovebirds are dating, so far none of them have mentioned any plans of getting engaged or married. To date, there are no signs of their breakup. 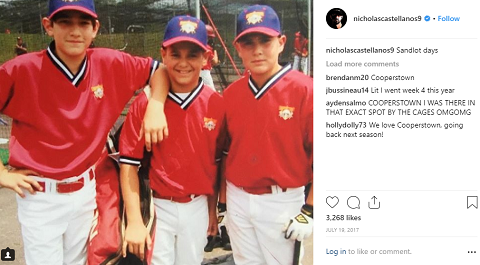 In the 2010 Major League Baseball Draft, Nicholas Castellanos was drafted by the Detroit Tigers with the 44th overall pick. Prior to the draft, he was rated as the third-best power hitting prospect as well as the fourteenth best overall prospect by the Baseball America.

During 2016, season, Castellanos's breakthrough came after he hit .302 with 17 home runs and 51 RBIs. Castellanos re-signed a one-year contract with Tigers for on 13th January 2017. He became the first player to drive in more than 100 runs at the age of 25 or younger since Miguel Cabrera on 29th September 2017.