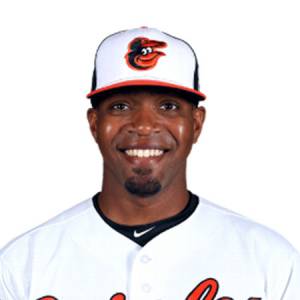 Mychal is married to his beautiful girlfriend Tiffani Givens and has two daughters named Ella and Makaylah Grace.

Mychal Givens's Net Worth and Salary in 2019

Mychal Antonio Givens has an estimated net worth of over $3 million and is yet time to earn the same net worth as that of Kansas City Royals pitcher Jakob Junis having the net worth of $20 million.

Talking about his career earnings, he has earned a nice amount of money which is around $4,748,713 so far and since he just started his career, he is said to earn more in his future.

Mychal Givens has reportedly signed a one-year contract with the Baltimore Orioles which is worth $2.15 million and the contract is signed on January 11, 2019.

Is Mychal Givens Married or Single?

The famous baseball player is quite charming and also is an attractive individual. He is married to his beautiful girlfriend Tiffani Givens in 2014 after being in an affair for a very long time.

Mychal and his spouse Tiffani are blessed with two beautiful daughters named Ella and June 5, 2014, and Makaylah Grace born on July 14, 2016.

So far they both are living a happy married life and there aren't any disputes rumored on the media regarding their marital relationship. In addition to this, he hasn't mentioned his past affairs or relationship with anyone.

Besides the field, Mychal is involved in several charity works and social events raising funds for poor and needy children. In his official Twitter account, he thanked several players for helping him with the charity games and tournaments including Richard Bleier.

Mychal stands a height of 6 feet 1 inch tall along with a decent weight, Talking about his age, he is currently 29 years old.

Mychal Antonio Givens was born on May 13, 1990, in Tampa, Florida, the United States. He is American and belongs to the Mixed ethnic group. Further, his star sign is Taurus.

Mychals in his childhood was raised by Liduvina Padilla, his great-grandmother along with her late husband Pedro Padilla.

Mychal Antonio Givens attended Henry B. Plant High School in Tampa, Florida where he played for his high school baseball team. Mychal didn't attend the University of Oklahoma after his high school career, rather he signed with the Baltimore Orioles.

Mychal started his professional MLB career with the Baltimore Orioles in 2015 since he was promoted o the Major League.

Since 2015, Givens is playing for the Baltimore Orioles and has shown outstanding performance on the sports field and is currently playing alongside some of the famous MLB players.