Mickey Mantle was an American professional baseball player who played his entire Major League Baseball (MLB) career (1951-1968) with the New York Yankees as a center fielder and first baseman.

He was inducted into the Baseball Hall of Fame in 1974 and was named in the Major League Baseball All-Century team during 1999.

How Much Is Mickey Mantle’s Net worth and Salary?

Looking at his legendary playing career, it was reported that he received $ 1, 128,000 which he earned over the course of his playing career.

After his retirement, he went into the Restaurant business, became an entrepreneur and also did his television commenting on the game. He was featured in several documentaries and sports videos.

Mantle was married to Merlyn Mantle, who was an American author. They tied the knot on December 23, 1951, following his rookie season with the New York Yankees. The couple had four sons: Mickey, Jr., David, Billy, and Danny. Billy died in 1994 due to the disease, known as Hodgkin. 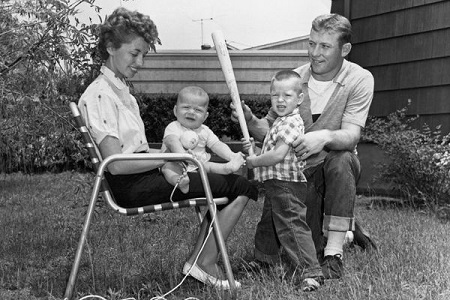 They remained married for 43 years, until Mantle's death in 1995. As per the source, he was quite consuming hard drinks and was diagnosed with hepatitis, cirrhosis, and cancer of the liver. Mantle was later admitted to Betty Ford Clinic in1994 band even had a liver transplant the following year in 1995. But died due to a heart attack on August 13, 1995.

He was interested since his early childhood and was named after his father's favorite baseball player, Mickey Cochrane.

After impressing a New York Yankee scout during his school years, he went to play for a couple of seasons in the minors league before joining the major league.

The American player made his debut with the renowned team, New York Yankees at the age of 19. He played his debut in 1951 by replacing fellow Yankee teammate, Joe DiMaggio at the center field.

During his illustrious 18 years playing professional baseball with the Yankees, he also won the triple crown championships with stats of 52 home runs, batted 130 runs and got a batting average of.353 thus giving him the American league’s Most Valuable Player of the Year in the same season.

He also won a coveted title a total of 3 times in his playing career and scored 536 home runs during his time with the American baseball team.

Mantle retired from professional baseball on March 1, 1969, and was elected to the National Hall of Fame for his outstanding contribution to only the Yankee team but also to the game of baseball in 1974.