Megan Rapinoe Vs Donald Trump for President in 2020? Poll finds the US Star ahead of the President 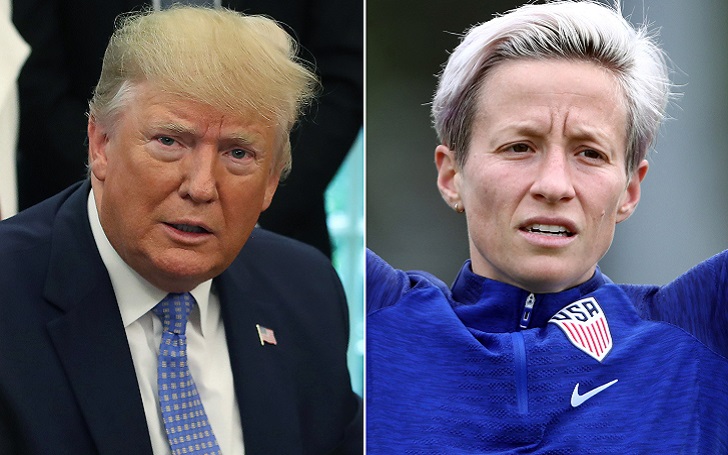 Megan Rapinoe, ahead of the Women's World Cup final against the Netherlands, announced she would not visit Donald Trump in the Whitehouse but the recent poll says she might throw him out of it.

After the US team co-captain rejected the invitation from the president Donaldo Trump ahead of the finals, Trump hesitated whether he would invite the team to the Whitehouse but didn't forget to congratulate them.

After Rapinoe revealed that she would visit Congress but not the White House, a Democratic firm conducted a poll among the people on “Megan Rapinoe v Donald Trump 2020 match-up” on public's demand. Surprisingly, the golden boot and golden ball winner in 2019 World Cup 42% to 41% for Trump, Public Policy Polling revealed.

"Rapinoe may be an unlikely Presidential candidate but her numbers still speak to a broader truth about Trump’s standing- the fact that he polls in the low 40s against any Democrat he gets tested against shows that electability concerns are overrated and Democrats should feel comfortable voting for the candidates they like the best, not just the ones they think have the best chance of beating Trump."

PPP said in a statement.

The people who could not choose between Rapinoe and Trump backed Hillary Clinton.

Although Rapinoe, 34, is unlikely to run for president, the survey from the left-leaning polling outlet does show potential concerns for Trump's reelection campaign.

Tyson Fury Vs Deontay Wilder 2 Fight Purses; How much will they Earn from the Fight? Wilder and Fury's Net worth 11 hours by Jack Ol