Mark is reportedly earning around $60,000, as his yearly salary from the sports network.  As of 2019, he reportedly has an estimated net worth of over $10 million. Mark is currently married to his longtime girlfriend Cindy Whitmarsh and has a son and two stepdaughters living with them.

Mark Sweeney was born on October 26, 1969, in Framingham, Massachusetts, the United States to parents Dan Sweeney and Peggy Sweeney. He holds an American nationality and belongs to White ethnic group.

Mark completed his schooling from Holliston High School. Later he attended the University of Maine and played baseball there. Moreover, he also played baseball during his high school days.

Mark Sweeney Net worth and Salary

The American baseball analyst and former baseball player Mark Patrick Sweeney have an estimated net worth of $10 million.

Besides his broadcasting career, he earned a lot of money from his playing career.

Let's put a light on his career earnings during his playing career.

Mark Patrick Sweeney is one of the most popular analysts of the FOX Sports Network who has made a successful career as a sports analysts.

Mark started his playing career after being drafted in the 1991 MLB Draft and made his debut with Boise Hawks in Single-A and later made his MLB debut in 1995 with St. Louis Cardinals. 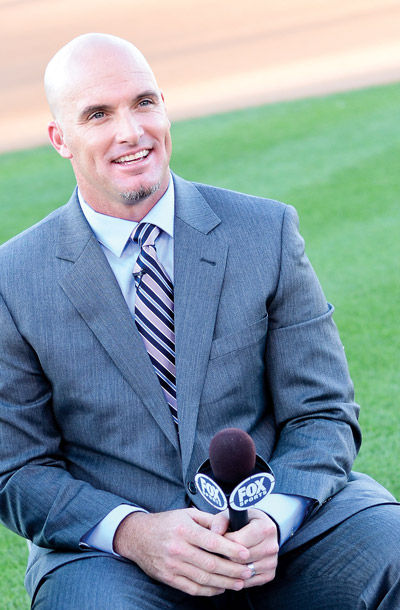 During his time with San Diego in 2006, his fellow player Barry Bonds showed positive in amphetamine test which he took from Mark's locker but later on Barry cleared Mark's name from it.

Mark remained with the Dodgers mainly during the 2008 season as a pinch hitter. Sweeney gave his jersey number 22 to his rookie teammate Clayton Kershaw in May 2008 and adopted # 21.

He began his broadcasting career with FOX Sports San Diego as their baseball correspondent and pregame color analyst in 2012 and also worked for FOX and FOX Sports 1. He worked alongside Kevin Burkhardt in the broadcasting of Pregame on FS1 and also with Chris Myers on the MLB on FOX.

Mark is married to his girlfriend Cindy Whitmarsh since July 2010. They were married after having an affair for a long time. Mark is blessed with a son named Gavin born on October 25, 2011, and also two stepdaughters.

Merry Christmas to all our friends and family! Blessed to have health and happiness this holiday season and spend it with people we love! #Grateful #family #MerryChristmas #love #SD

They first met at their friend's party where they are introduced by common friends.

Cindy was the wife of Mike Whitmarsh before getting married to Mark Seeney. Mike had a tragic death because he committed suicide by inhaling carbon monoxide from car exhaust.

The couple is living a happy married life since there are no rumors of their divorce. Besides being a former MLB player and sports analyst, he is also quite popular on social media and has a large number of fan following.

Currently, Mike is living a happy and lavish life with his wife/spouse and children.