Luke Hughes is an American ice hockey offensive defenseman who has the great potential to develop into a dominant two-way defenseman. The US National Team Development Program product is set to be a top-five pick in this year’s draft. He is all set to follow his brothers Quinn and Jack as impact players at the NHL level.

Canton, Michigan native, Luke Hughes was born on 9th September 2003, under the star sign Virgo. The seventeen years old holds an American nationality and is of white ethnic background. He is a 6’2”, 182 lbs.

Luke Hughes, a left-handed defenseman from Canton, Michigan started his career as a professional player for the Toronto Bulldogs team during the 2012 season. Then he began playing professionally joining the Toronto Marlboros Mn Bntm AAA team of the GTMBHL league during 2016.

He then moved to the Little Caesars 14U AAA for 2017-18 where he would spend another season in that program,

For 2019-20, he joined the prestigious US National Team Development Program and immediately saw success. That same season, he played for the U17 team playing at the 2019 World Under-17 Hockey Challenge where he had a goal and 3 assists in 6 games in that tournament. The Team earned a Silver Medal.

What next? he’s already committed to playing for the University of Michigan in 2021-22.

Luke comes from a hockey family. His father, Jim is a former defenseman for Providence College in the ’80s who held coaching roles across the NCAA, IHL, AHL, NHL, and KHL. Most notably, Jim was the Director of Player Development for the Toronto Maple Leafs from 2009 to 2015. His mother, Ellen, on the other hand is a former defenseman for the University of New Hampshire and the USA National Team. She is the recipient of a World Championship Silver Medal in 1992. 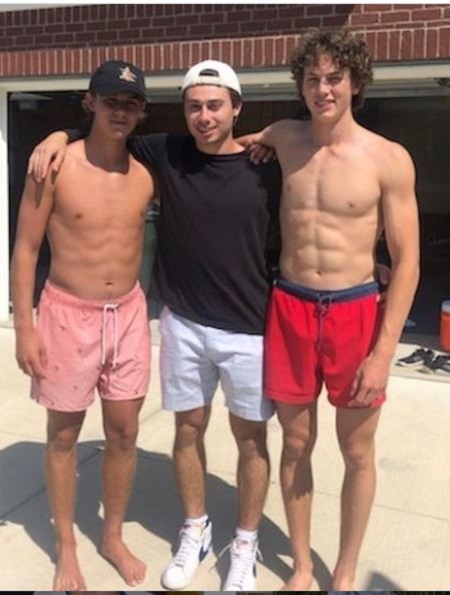 His brother, Jack Hughes is a 2019 NHL Draftee signed to New Jersey Devils, and the elder, Quinn Hughes was drafted 7th overall by the Canucks in the 2018 NHL Entry Draft.

About his love life, there is no information about his relationship or girlfriend. Currently, he is possibly single.

Aforementioned, Jack Hughes is yet to turn professional. High school and college athlete does not get paid playing for the university. Nevertheless, the young talent on the way to NHL. The average salary of an NHL player in 2021 is the average salary of NHL player is $0.7 million per annum where as the highest salary can go up to $16.3 million.