Lucia Loi is a undergraduate at Manchester Metropolitan University who is studying Advertising and Brand Management. Earlier, she worked as a PR executive for the top Manchester PR agency, Sugar PR. But the thing that gave her spotlight is her relationship with Marcus Rashford, a forward for Premier League side, Manchester United and the England national team.

Manchester, United Kingdom native, Lucia Loi was born on 4th August 1997, under the star sign Leo. The twenty-two years hold an English nationality and belong to a multi racial-ethnic background.

Lucia is currently dating the twenty-two years old forward, Marcus Rashford. The couple came to the public eye's when the stunning brunette was spotted in the stands during the England vs Colombia match at the 2018 FIFA World Cup, cheering up from her Man U star.

Earlier, she shares a sweet snap of the two on her Instagram account to wish him a happy birthday back in 2016.
It is thought that the Lucia and Marcus have been dating since, if not longer.

A matter of fact, the duo has maintained their relationship a low key. Moreover, they have not shared each other pictures on their official socials. No doubt, Lucia and her boyfriend are pretty serious about their affair but they have shared any plans regarding engagement and wedding.

Since Lucia is living her personal life private, there is information about her past affair or girlfriend. On the other hand, her bae, Marcus Rashford previously in a relationship with social media influencer, Lauryn Goodman. However, the couple never confirmed their relationship in the public, especially Lauryan always disgraced by rumors she is dating Marcus Rashford and denies romance. As of now, she is in a happy long term relationship.

Who Is Lucia Loi? Age & Height

Lucia is the daughter of Vicky Loi who worked at Ciao Bella restaurant in Manchester. She was raised alongside her brother, Alex Loi. Further, she comes from an Italian descent family; many members of her family live in Italy. 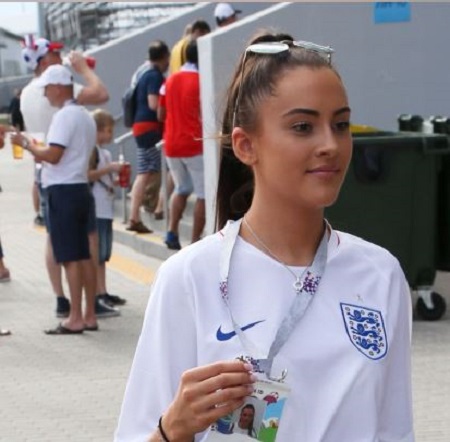 In 2014, she graduated from Ashton on Mersey Secondary School. Currently, she is pursuing her bachelor's degree in Advertising and Brand Management at The Machester Metropolitan University.

Loi's net worth is decent but it's under wrap. Currently, she not involved in any job rather fully into her study. Earlier, she served as a customer advisor at The Claims Guys (Nov 2015 - May 2016), assistant PR Event manager at Sugar PR (Feb 2016 - Dec 2016), a waitress at Cafe 4 U, and most recently did intern at Social Chain Agency.

Similarly, her boyfriend, Marcus Rashford, a Manchester United forward since 2015, has an estimated net worth of over $10 million. Reportedly, the player was earning £1,000 a week. Following his rapid breakthrough, Rashford’s salary was quickly increased to £20,000, then £50,000 and £70,000.