Lewis who just started his MLB career has an estimated net worth over $200,000.

As of 2019, Lewis has an estimated net worth over $200,000 which we believe is completely generated from his professional career. Moreover, he is expected to collect $555,000 as entire career earnings by the end of 2019.

The 23 years old baseball player is too young to be married. Additionally, the news about Lewis being in a relationship is not in the media yet. 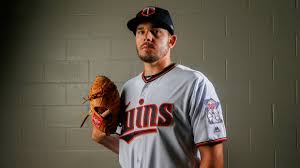 Lewis Thorpe was born on 23 November 1995, in Melbourne, Victoria, Australia to Ross and Lyn. As per Lewis' birth, he is an Australian native and belongs to the ethnic group of white.

Also, Thorpe was born under the star sign, Sagittarius. As a youth, Thorpe trained at the Melbourne Aces Baseball Academy and competed in the international youth baseball tournaments.

His first professional contract was with the Minnesota Twins and during the time, he received $500,000 signing bonus. Before player in the Major League, he played in the minor league and represented the teams like Gulf Coast Twins, Cedar Rapids Kernels and many more.