Leonardo Spinazzola is an Italian footballer who plays as a midfielder/left-sided or wing-back for one of his nation's sides, AS Roma, and the Italian national football team.

As a youth, Spinazzola trained with a former football academy, Virtus Foligno, Siena, and Juventus. He was promoted to Bianconeri's senior side in 2012 but would be loaned out to several Italian teams for the next seven seasons. He was first sent to Empoli, who were competing at the second division of the Italian league, Serie B.

He gave his appearance for Empoli in their seven matches. After that, his loan spell was cut short and he moved to Virtus Lanciano with whom he played a total of three games before again being loaned out to his first club, Siena. For the Robur, he made 24 advents - appearing in each of their matches that were kicked off during his spell.

In August 2014, he was signed by Atalanta, once again on a loan deal with Juventus. He, however, was given playtime in only 2 matches. The following season, he started to play for yet another Italian squad, Vicenza, and then for Peruga.

He returned to the Goddess in July 2016 and would be their regular for 48 matches. He was called up by Juventus to help them in their main roster in the summer of 2018 but was ruled out for the first half of that season due to injury. The Foligno-born midfielder made his Juventus debut on January 12, 2019, in a 2-0 win over Bologna in the Coppa Italia. He marked his Champions League introduction on 12 March 2019 starting in Bianconeri's famous 3-0 home win over Atletico Madrid.

Spinazzola next joined Roma in a four-year deal on July 1, 2019. To date, he has played 51 games for the capital side. Spinazzola has been active on International duties since 2017 playing his first game in the Azzurri's 2-1 friendly win against the Netherlands.

The six-foot-one left-back has outreached $20 million in career earnings as far as the insiders know or tell. And that's roughly excluding bonuses and other stipends. While statements differ among each other when it comes to estimating the Italian's net worth, most of them, nonetheless, agree his hitherto fortune sits around $10 million or so. 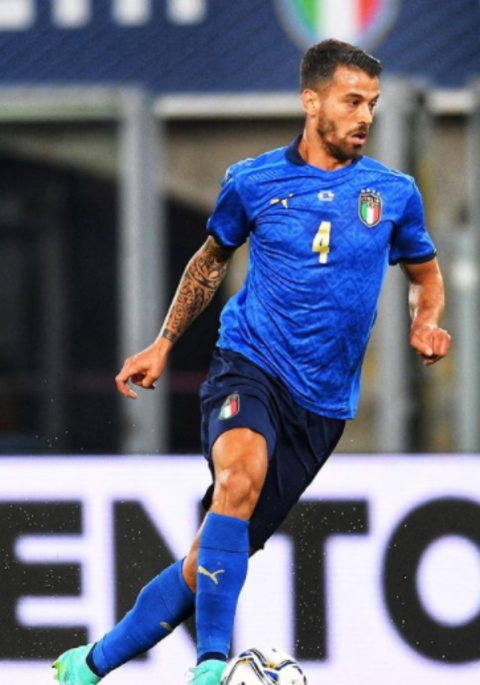 There's still plenty of cash to be made for Spinazzola considering the length of his existing contract. Assuming the current graph in which he is spawning money, Roma's number 37 will reasonably have hit over $35 million exclusively in salaries by the end of his term in 2024. The above speculations mostly include the salaries that have been provided to him since the start of his pro career.

During the second half of the 2010s, he was told of pocketing a yearly salary that averaged here and there of $1 million whereas his present accord has been discussed giving him payouts worth ahead of $6 million per annum; by and large.

Former AS Roma striker Cengiz Under's Net worth and Girlfriend

The Giallorossi's winger hunter is married to Mirriam Sette. Together, they are the parents of Mattia, Sofia, and Yago. Spinazzola, through his Instagram, has confirmed, multiple times, that he's been with Sette for more than 11 years, having had their wedding on August 13, 2020. In fact, the Italian defenseman is pretty extroverted when it comes to sharing his family doings over social media and so is his partner. The duo's followers have seen it all, be it their beachy vacations, the birth of each of their offsprings, or the celebration of their anniversary along with the footballer's achievements on the pitch.

Sette works at the Universita Degli Studi di Perugia, Italy, also the very institute from where she graduated. The native of San Severo lives in Foligno with her husband and their three children.