Know who has a Big L on Josh Rutledge's lawfully wife Laura Rutledge? College Football Player Accidentally Tackles ESPN Reporter and Asked Her on a Date 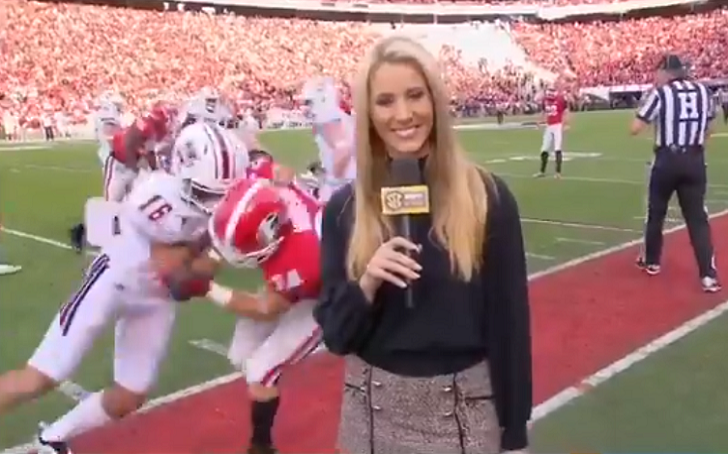 All of this happened during and after a college game between Georgia Bulldogs and the UMass Minutemen in Athens, Ga. As the former beauty pageant, and currently, an ESPN's college football reporter Laura Rutledge was reporting the sidelines from Sanford Stadium, she took a hit and was knocked to the ground as she was caught in a collision between football players going out of bounds but a college footballer's heart got hit with a big L.

Luckily, Rutledge wasn't seriously injured and was able to laugh the incident off quickly.

On 22nd November, she wrote:
So many thanks to everyone at @UGAAthletics for their help after this happened…even though I'm a Gator- on her twitter

Took an L in Athens today. So many thanks to everyone at @UGAAthletics for their help after this happened...even though I’m a Gator pic.twitter.com/b1FTCPaqtH

Running back for the University of Georgia, Prather Hudson who hit the reporter immediately apologized her, and after ending his first line he quickly asked her out on a date showing the Baseball infielder Josh Rutledge's wife out on a date that he has a big L on her.

When your man spots a better option pic.twitter.com/zPuH46WD15

"Hey @LauraMRutledge really sorry I knocked you down," he wrote on Twitter, "but... I can pick you up at 7."

Hey @LauraMRutledge really sorry I knocked you down, but... I can pick you up at 7 https://t.co/jkHsTsLk0s

So, Prather was denied with a smiling emoji and silently dragging Josh Rutledge's ring into the conversation, bad luck for our College prospect, but the whole incident gave us a lot to talk about.