Kent Johnson is an American ice hockey forward who is considered one of the excellent prospects of this year's NHL Draft (2021). He finished his freshman season at Michigan and made himself eligible for this draft.

North Vancouver, British Columbia native, Kent Johnson was born on October 18, 2002, under the star sign Libra. He is the son of Jay and Anita Johnson. His father, Jay is a real estate investor while his mother, Anita, is an accountant. He has one brother, Kyle who plays hockey at Yale ('22).

A 2020 graduate of Burnaby Central, Kent Johnson was a member of Canada West at the World Junior A Challenge. He was BCHL All-Rookie and Interior Division Rookie of the Year after having a 46-point season as a rookie in 2018-19. He was named Canadian Junior Hockey League Top Forward of the Year.

For a collegiate career, he enrolled at the University of Michigan where he was All-Big Ten Honorable Mention and Big Ten All-Freshman Team in 2020-21. Further, he finished second on the team in scoring with 27 points on 9 goals and 18 assists in 26 games. He concluded his freshman season with 8 goals and added 17 assists for 25 points in 24 games.

The 21-year-old ice hickey forward's earnings and net worth are yet to disclosed and are still under review. It is because he is still a collegiate athlete and not to mention, college hockey players don't have a great source of earnings.

Nonetheless, it can be assumed that he doing some side-job and earning a decent sum.

A top prospect in the 2021 NHL draft, if he gets picked by any team his earnings and net worth will drastically increase. It is reported that the starting salary of a newly drafted NHL player is $700,000, with the figures increasing considering the player's stats.

Kent Johnson's present relationship status is single. He is relishing his single time by playing the sport he loves and by going on vacations. There is also no news of him having a girlfriend in the past. 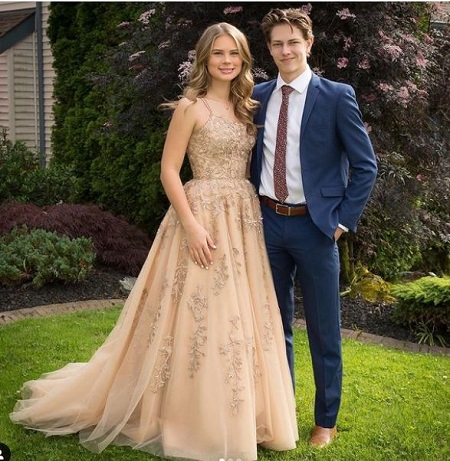 Scrolling through his Instagram account, Johnson has shared few pictures from his pro which also features one with his beautiful prom date.