Kate Phillips is a renowned British actress who came into the limelight after making her appearance in some popular movies and TV shows. Among all those acting credits, her portrayal of Jane Seymour in Wolf Hall (2015) and Linda Shelby in Peaky Blinders (2016-19) laid the foundation for her success.

Hailing from the suburbs of England, United Kingdom, the beautiful actress was born in 1989. Likewise, she celebrates her birthday on the 21st of May every year. As for her family details, the actress is yet to give an official insight into it. Due to that, nothing can be said about her parents and if she has any siblings or not. Nonetheless, it is known that she first attended the University of Leeds. Later, to follow her interest in acting, she enrolled at Guildhall School of Music & Drama.

Career: Movies and TV Shows Plus Net Worth

The now-famous actress initiated her acting career in 2015 when she portrayed Jane Seymour's role in a TV series titled Wolf Hall. The next year was very fruitful to her “starting phase” career as she appeared in four TV shows and a short movie.

First, she played in War & Peace, then in The Crown, My Mother, and Other Strangers, and The Astronaut. However, all of those didn’t provide her the fame that she received after playing the role of Linda Shelby in Peaky Blinders (2016-19).

Following such newly received fame, the British-born actress didn’t look back and continued to amuse everyone through her brilliant performances. To this date, she has 12 acting credits to her IMDb profile. One of the most recent acting projects of her includes the movie named The English Game, a movie based on football in England.

Moreover, it seems that those numbers are going to increase very soon as she has already signed another movie. The upcoming movie is titled Benediction, and it is already in post-production.

With such an amazing career, it must be sure that Phillips has managed to accumulate a healthy net worth. Sadly, there are no details as to how much her exact net worth is. However, as per PayScale, it is known that the average salary of a British actress is £50,000 or $69600.

Is Phillips Married? (Husband and Children?

The Downton Abbey movie actress is very private when it comes to her personal life. She also has maintained secrecy on her Instagram handle. Phillips has not shared any pictures with any man, through her Instagram handle, who can be guessed as his possible partner.

As a result, there is no information if she is in a relationship and has a boyfriend or married and has a husband and children. 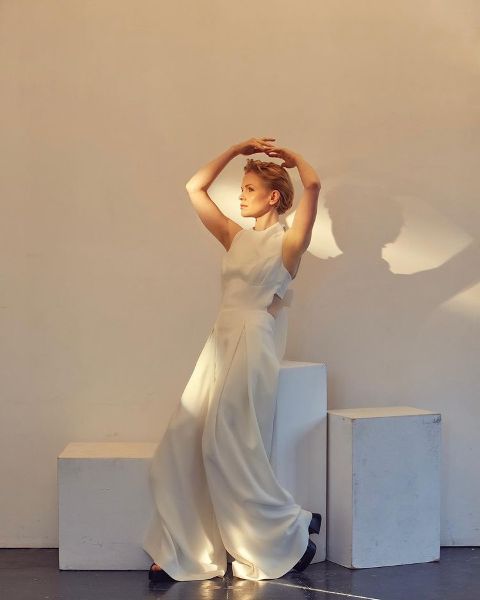 Her bra size is 32B, her waist size is 25 inches, and her hips size is 35 inches. Moreover, her hair color is blonde, and her eye color is hazel.