John Coppolella's Career in the MLB

The Talented personality had an interest in joining the MLB. To pursue his dream, John turned down his offer from Intel. He chose to continue exploring opportunities in baseball and eventually joined New York Yankees for an internship. In his first few years, Coppolella rose to fame through his visions and ideas. 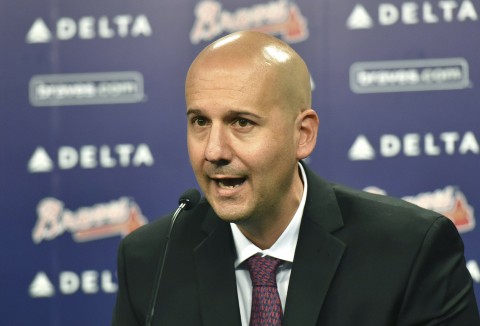 John speaks at an event for Braves SOURCE: Atlanta Journal

In 2006, Atlanta Braves searched for a replacement for their director. The Braves signed him as their director of baseball operations. John worked with the franchise in the same role until 2011 and then served as director of professional scouting. In 2012, Coppolella got promoted to assistant general manager. In the next few years, Numerous events unfold one after another. John got promoted to general manager and signed a four-year contract in October 2015.

To everyone's surprise, Coppolella resigned from the post in October 2017. John had been under fire for disregarding MLB rules against tampering with players on other teams. MLB banned him for his life for violating several rules and regulations on signing new players. Since then, He has remained out of the media reach. John could be living a happy life along with his family.

John is married to his longtime girlfriend. Cheryl Decker. The love birds exchanged their wedding vows in 2007. They had a private wedding ceremony where they had invited only a few members from both the family and a few close friends in the list. None of them have shared about their first meeting experience. Unlike couples, They do not show much presence on social media.

John and Cheryl are the proud parents of three children. There has been no rumor of the couple having ups and downs in their married life. The family of five is living a happy married life.

John Coppolella has an estimated net worth of more than $1 Million. He had not shared a word about his economic life in the media. As per sources, New York Yankees General Manager Brian Cashman earned $3 million. John worked in the industry for almost two decades, rejecting offers from Intel. He was one of the highest-earning officials in his days.