Joe Sakic is a Canadian professional ice hockey executive and former player. He is one of the few players who are committed to a single team only. He played his entire 21-year National Hockey League (NHL) career with the Quebec.

After serving as co-captain in 1990-91, Sakic was regarded as one of the most capable team leaders in league history. Further, Joe is happily married to his beautiful wife Debbie Metivier. Besides, the duo is blessed with 3 children.

Joe Sakic has a jaw-dropping net worth of $60 million. Further, the former ice hockey player summons his net worth from his previous playing career and current ice hockey executive career.

Joe Sakic is living a married life with his long-time girlfriend, Debbie Metivier. Further, the duo is blessed with 3 children. Their first baby boy was born in 1996. After that, the couple was blessed with twins; son Chase and daughter Kamryn.

Joe Sakic with his Wife and Children SOURCE: The Denver Post

Further, there is no information about when the couples got married but, they met at a local high school while Joe was playing in Swift Current.

Besides, Joe is not active in social media. As he is of the late '60s, social media is not part of his life. Further, the former player is also nor engaged in any kind of rumor or controversy. Additionally, we also don't have his previous dating history.

Who is Joe Sakic? His Early Life and Family

Joe Sakic was born in Burnaby, British Columbia, on July 7, 1969. He was born to his parents Marijan and Slavica Sakic. They were the immigrants from Croatia, then Yugoslavia. 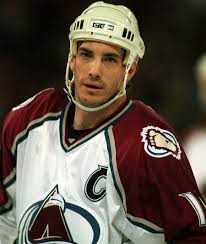 Growing up in Burnaby, he did not learn to speak English well until kindergarten, having been raised with Croatian as his mother tongue. When Joe was just 14 years old, he wanted became hockey player after watching his first NHL match between the Vancouver Canucks and Atlanta Flames.

Further, there is no information available regarding his educational qualifications. However, he seems quite educated. Moreover, he holds Canadian nationality and is of Caucasian ethnicity.

Joe Sakic stands 5 feet 11 inches tall in height. Besides, he weighs about 195 lbs (88kg). Talking about his appearance, he has a fair skin tone with blonde hair. Besides, he has a pair of hazel colored eyes.

Joe Sakic was drafted in the 1987 NHL Entry Draft by the Quebec Nordiques. Rather than make the immediate jump, he told the Nordiques management he would prefer to spend the 1987–88 season in Swift Current to prepare for the NHL.

Joe made his NHL debut on October 6, 1988, against the Hartford Whalers and registered an assist.  His first NHL goal came two days later against goaltender Sean Burke of the New Jersey Devils.