Jimmie H. Sherfy reportedly earns around $555,000 as his yearly salary from Arizona Diamondbacks. Further, Jimmie Sherfy has an estimated net worth of over $0.5 million.

Is Jimmie Sherfy Single? Know About His Personal Life

Jimmie is a famous and attractive individual however any news about him being in a relationship isn't found in media or portals. Further, he is not much active in social sites like Facebook, Instagram, and Twitter so any updates about his personal life are barely found. 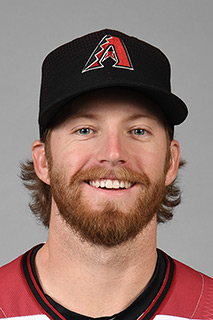 He seems to be career focused man and keeps himself apart from any controversies that may affect his professional career. Jimmie is a career-focused man and he spends most of his time playing baseball and practicing.

The Famous MLB star is 6 feet tall in height and weighs around 79 kg. Currently, Jimmie Sherfy is 27 years old.

How much is Jimmie Sherfy's Net Worth and Salary in 2019?

Jimmie Sherfy has an estimated net worth of over $0.5 million in 2019 and is supposed to earn a quite good amount of money from his baseball playing career in the future.

Talking about his current contracts Jimmie Sherfy has signed a one-year $555,000 contract with the Arizona Diamondbacks, including $555,000 guaranteed. Jimmie is receiving around $555,000 annually from the Diamondbacks team as his salary for 2019.

Zack Greinke is the highest paid player of the Arizona team in 2019 with base salary more than $31 million.

Jimmie Sherfy has earned $865,743 from his entire MLB career. Since energetic and hardworking MLB player, Jimmie is in starting of MLB career, he is estimated to earn a good amount of money in his future if he does not drop his baseball career.

Jimmie H. Sherfy was born on December 27, 1991, in Camarillo, California to parents Brad Sherfy and Jennette Sherfy. Jimmie is an American and belongs to the White ethnic group. Further, his star sign is Capricorn.

Jimmie attended Newbury Park High School in Newbury Park, California. After completing high school, Jimmie enrolled at the University of Oregon and played for the college baseball team there from 2011 to 2013.

Jimmie is an active and energetic baseball player from his high school period. He was drafted by the Arizona Diamondbacks in the 10th round of the 2013 Major League Baseball Draft.  He made his professional debut for the Hillsboro Hops and was promoted to the South Bend Silver Hawks during the season.

Talking about MLB, he made his debut on August 20, 2017. During his 2017 season, he was listed in the list of the only two pitchers having the winning percentage of 1000 and more than one victory with Arizona and the other pitcher is Craig Breslow.