Jennifer Kupcho is a rising American professional female golf player. She turned professional in 2019. Jennifer won the 2020 Colorado Women's Open. She has more than half-a-dozen Amateur wins in her early career. On 3rd April 2022, she won her first LPGA at Chevron Championship.

Jennifer Kupcho was born on May 14, 1997, in Littleton, Colorado. She is among the children born to Mike Kupcho and his wife. Jennifer has an older brother named Steve. Jennifer likes to keep her personal life away from the media. After graduating from High School, Kupcho enrolled at Wake Forest University. Jennifer was the number one ranked women's amateur golfer in the world for more than eight months.

She has earned a huge from in her very first season with the LPGA. A golf player has several income sources like prize money, endorsement deals, sponsorships, and contracts. Jennifer took home more than $20,000 from her first LPGA event of Gainbridge LPGA at Boca Rio. 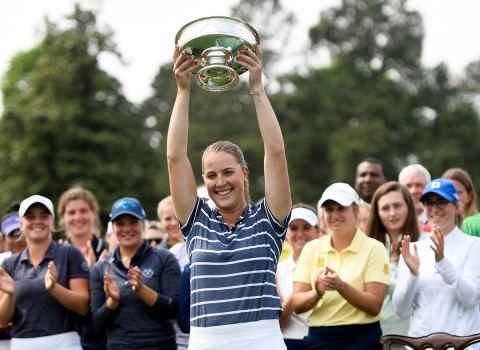 In ANA Inspiration Tour, Jennifer made $35,000. From ShopRite LPGA Classic presented by Acer, the American golf player made $114,323 when she finished 2nd on the list. Then, in the KPMG Women's PGA Championship, she earned $112,000 after making it to 7T. At the end of the 2020 season, Jennifer made more than $50,000 from U.S Women's Open and CME Group Tour Championship.

Jennifer is very much early in her career. She has just played a season of her professional career. Kupcho shall be earning millions in the days to come. Totaling her career earnings, it sums to $906,592. Jennifer Kupcho is another rising American golf player with a similar net worth to Jennifer.

Who is Jennifer Kupcho Dating? Know Her Relationship Status.

Jennifer Kupcho is very much private about her relationship status. She seems to be living a single happy life. Jennifer is very much early in her career and must be focusing on her career rather than spending time with people. She is very much close to her parents. Kupcho spends most of her time practicing for her games.

Jennifer got numerous athletic scholarships from universities but chose Wake Forest University. She was part of the University's golf team. Kupcho won the Honda Sports Award in 2018 and won Mark H.McCormack Medal the same year. Jennifer ranked at the No.1 women's amateur golf after winning the 2018 NCCA Division I Golf Championship.

In her Senior Year, Kupho won the inaugural Augusta National Women's Amateur.  In 2014,  She won her first title of  Colorado Junior Stroke Play Championship.  In 2017, She had reached the T21 round at the U.S Women's Open. Jennifer made her professional debut at the 2019 U.S. Women's Open. The American golf player won the 2020 Colorado Women's Open.

Jennifer has repressed her country in several events. She was part of the winning team at the Arnold Palmer Cup, Curtis Open, and Espirito Santos Trophy in 2018.