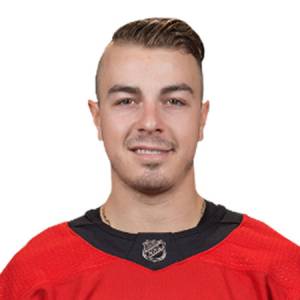 Jean-Gabriel Pageau's Net Worth and Salary

As of 2019, Jean-Gabriel Pageau has an estimated net worth of over $5 million and is same as that of Leafs player William Nylander. He reportedly signed a three-year $9.3 million with Ottawa Senators in 2017.

Jean has an average salary of $3,100,000 annually and Pageau so far has made earnings of $8,725,390 from his entire NHL career. Dion Phaneuf is also in the list of the highest paid players of the Senators team since he earns an annual average salary of around $7 million.

He has an endorsement deal with BMW and also owns several cars gifted by the company.

Jean-Gabriel got married to his girlfriend Camille Beeeby on Sunday of August 2018 in a lavish wedding ceremony in front of family and friends at Almonte Ontario, Canada. The couple was engaged with each other in June and got married only two months later.

The couple is reported to be high school sweethearts and knew each other in their college days. They have been dating each other since the early 2010s.

Jean-Gabriel Pageau was born on November 11, 1992, in Ottawa, Ontario, Canada. Born to parents Jean-Gabriel and Yda Pageau, he also has a sister named Sandryna who is currently a social worker for the municipality of Gatineau.

Little night with my sista!

As per his nationality, he is Canadian and belongs to the White ethnic group and his star sign is Scorpio.

Jean started his professional NHL career after being drafted in the 2011 NHL Entry Draft by the Ottawa Senators in the 96th overall pick. He started his career with the Ottawa's affiliate of the American Hockey League Binghamton Senators.

Besides his NHL career, he also represented his country Canada in the 2018 IIHF World Championship on April 12, 2018. Currently, he is playing for Ottawa Senators along with several famous players including Brady Tkachuk and Cody Ceci.