American professional ice hockey forward, Jake Guentzel is currently signed to the Pittsburg Penguins of the National Hockey League (NHL). He was selected 77th overall in the 3rd round of the 2013 NHL Entry Draft by Pittsburgh Penguins.

Guentzel recently signed a 5-year contract extension worth $30 million with Penguins and will earn the average salary of $6 million. He has an estimated net worth of $2 million. Jake is currently in a relationship with his girlfriend Natalie Johnson.

Jake Guentzel recently signed a contract extension of 5-year worth $30 million with Pittsburg Penguins and will earn an average salary of $6 million in a year. His salary for the 2019 season is reported to be $7,000,000.

Here is the contract details:

* Modified NTC in years 4 & 5 in which player provides a 12 team No Trade listhttps://t.co/63RFDi325C pic.twitter.com/LP1CAIhQbb

Jake attended Hill-Murray School, where he initially started off his hockey career and played two years of varsity hockey. Upon graduation, he enrolled at the University of Nebraska at Omaha and joined Omaha Mavericks men’s ice hockey. He played just one season.

On 23rd May 2016, Jake Guentzel signed a three-year entry-level contract with Pittsburgh Penguins. On 21st November, he made his NHL debut against the New York Rangers, scoring two goals on his first two shots. However, Penguins lost the game 5-2.

His career first hat-trick came on 16th of April 2017, which included the game-winning goal in overtime, to put the Penguins up 3-0 in their first-round playoff series against the Columbus Blue Jackets.

Following the contribution, Jake became the first Penguins player to score a playoff hat-trick, as well as only the player in NHL history to score a hat-trick and overtime goal in the same game of the playoffs.

On 11th June 2017, he took the Stanley Cup to Penguins after defeating the Nashville Predators in six games. During the run, he recorded 21 points tying Ville Leino and Dino Ciccarelli for a score by a rookie in a single post-season.

Guentzel began the 2017-2018 season in the NHL, recording a career-high 48 points in overall 82 games, leading the Penguins for the 2018 Stanley Cup playoffs.

In the first round of the playoffs, he scored four goals in an 8-5 match six victories over the Philadelphia Flyers, becoming the third Penguins player, behind Kevin Stevens and Mario Lemieux, to score four goals in a playoff game.

Jake Guentzel is yet to be married and is currently involved in a romantic relationship with Natalie Johnson. His girlfriend, Natalie is a native of Nebraska born on 22nd of October 1995.  A graduate of the University of Nebraska, Natalie was also a midfielder with the Omaha women’s soccer team. 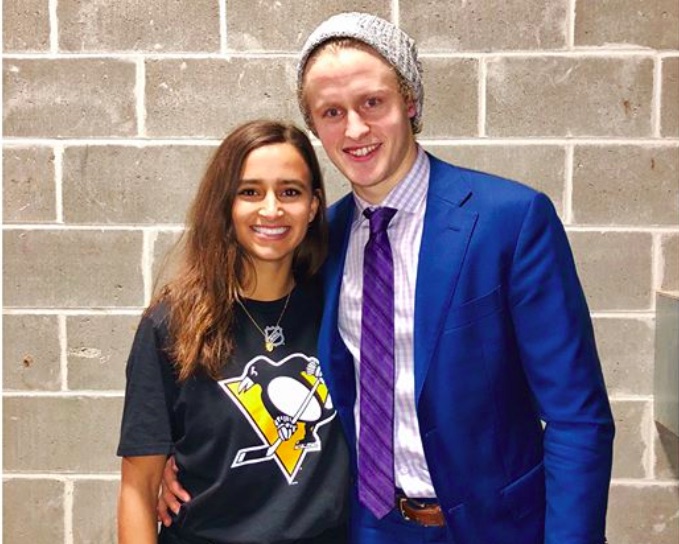 Guentzel seems to be a pretty secretive person when it comes to his personal life. Also, he has not posted a single picture on his official social sites including Facebook, Instagram, and Twitter.