2009 Mr. Pretoria, Jaco de Bruyn, is a South African model and bodybuilder who is quickly becoming one of the recognizable faces in the WBFF world. On top of that, he works to help his fans live healthier lives as well.

Pretoria, South Africa native, Jaco de Bruyn was born on 15th December 1984, under the star sign Sagittarius. As per nationality, he is South African and belongs to the White South African ethnic group.

Being a model, bodybuilder, as well as personal trainer & online Coach, Jaco de Bruyn's income is tremendous. As of 2019, his net worth is estimated at $0.5 million.

Jaco de Bruyn is married to his long-time girlfriend, Renate de Bruyn, with whom he shares two children. In most of his interviews, he credits his spouse for being one of his significant support systems who has helped him actualize most of his dreams. 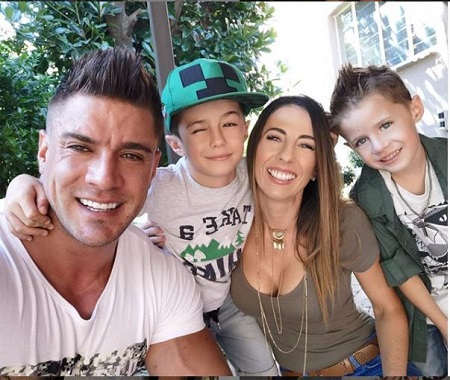 Jaco with his wife and children SOURCE: Instagram @jacodbruyn

On the other side, his wife, Renate, is an entirely confidential person when it comes to her pesonal life. There is not much information about her as well as she has set her Instagram account private.

Growing up, Jaco was very active in sports, especially in the running. In his twenties, he realized being in a bad state, which he describes himself as ‘unfit and skinny’ partying with his friends every weekend. By 23, he decided to turn things around and began training.

In 2009, Jaco de Bruyn won Mr. Pretoria and subsequently was 1st runner up in Mr. South African contest. The following year, he represented his native country in 2010, Mr. World Championhsip, where he ended up in 8th position.

Later, he had to choose between pursuing modeling or bodybuilding. He decided to incorporate both in his career.

In 2012, he got his WBFF Pro Card. Then, he made his debut the following year, contesting in the WBFF World Championship, coming out in the 3rd position. He came back to the same show in 2014 and came 4th.

Now, he serves as a personal trainer and online coach.